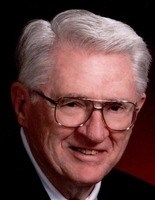 BORN
1926
DIED
2021
FUNERAL HOME
Livingston Funeral Home
1830 North Main
Kingman, KS
Joe Pat White
Kingman - Joe Pat White, co-founder of White's Foodliner, was born Aug. 7, 1926, in Faulkner, Kansas to Jack and Mildred Justice White. He passed away after a short illness on Sept. 27, 2021.
Joe spent his youth in Dodge City, Kansas and graduated from Dodge City High School in 1944. He was an Eagle Scout and played varsity football and basketball. He was on the 1942 undefeated Dodge City High football team. He enlisted in the U.S. Navy after graduation and served in the Pacific Theater. After his discharge, he enrolled and graduated from Dodge City Junior College, attended the University of Kansas for a semester and graduated from the University of Denver in Colorado. During his time in Jr. College he me the love of his life, Frances Arlene Ewy, and they were married on Sept. 10, 1950. Joe sold insurance (and hated it) for Cimarron Insurance and Frances continued her position as office manager/head bookkeeper for McKinley-Winter Livestock Co. In 1953, Joe and Frances took a leap of faith and purchased a small grocery store in Coldwater, KS and began raising their family. In 1971, they purchased a store in Cimarron, KS and in 1974 a store in Kingman, KS. In 1974, they moved to Kingman and lived there most of their lives, with short stints in Dodge City and Wichita. In 2016, as Frances' dementia advanced, she moved to Presbyterian Manor in Wichita; Joe followed two weeks later. After Frances' death in February 2019 at the age of 94 and his disdain for COVID rules at Presbyterian Manor, Joe moved back to a duplex in Kingman where he could eat lunch at his favorite restaurant, Jeri's Kitchen, with his dear friend and attorney Ted Geisert and they could discuss and solve ALL the world's problems. Joe was a former member of the Coldwater Presbyterian Church and served the board of the church and member of the Kingman United Methodist Church. He was a Scoutmaster and leader and was a past President of the Kansas Food Dealers Association.
Joe was preceded in death by his parents, his beloved wife Frances, his daughter Melody Davenport, baby son Jack Henry, grandson Joe Douglas Davenport and his brother Jack.
Survivors include his sons Pat (Tonya) of Kingman, Michael of Afton, OK, Jay of Valencia, Spain, sister Nancy Sherer, a brother in law Orlan Buller, grandsons Jordan, Brennan, Cale and Conner White, granddaughters Karly and Caitlyn White, great-grandchildren, Moxie, Oliver, Videl, Murphy and Arlo White and numerous nieces and nephews.
Funeral services will be held at the Kingman United Methodist Church, on Monday, Oct. 4, at 2:00 p.m. Visitation will be at the Livingston Funeral Home Sunday, Oct. 3 from 1:00 p.m. to 7:00 p.m., with the family present from 5:00 p.m. to 7:00 p.m.
Memorials are suggested to the Kingman Carnegie Library and Kingman Rural Health Center both in care of Livingston Funeral Home.
Published by Dodge City Daily Globe from Oct. 4 to Oct. 5, 2021.
To plant trees in memory, please visit the Sympathy Store.
MEMORIAL EVENTS
To offer your sympathy during this difficult time, you can now have memorial trees planted in a National Forest in memory of your loved one.
Funeral services provided by:
Livingston Funeral Home
MAKE A DONATION
MEMORIES & CONDOLENCES
Sponsored by Livingston Funeral Home.
0 Entries
Be the first to post a memory or condolences.