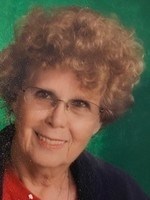 FUNERAL HOME
Bryant Funeral Home
1425 Patton Road
GREAT BEND, KS
Marsha McConnaughy
Bennington, NE - Marsha Lynn McConnaughy, 79, passed away August 24, 2021, at her home in Bennington, Neb. She was born March 9, 1942, at Great Bend to John & Helen (Damon) Hoge. She married Clarence McConnaughy at Great Bend on October 14, 1961. He died July 9, 2012.
A longtime Dodge City resident before moving to Bennington in 2012, Marsha was a bookkeeper for WW Manufacturing, and upon her retirement, served as a paraprofessional for Comanche Middle School in Dodge City. She was a longtime girl scout leader and especially loved spending time with her family.
Survivors include, a son, Kyle McConnaughy and wife Kerry of Bennington, Neb.; and three grandchildren, Connor, Corey and Kelsey. She was preceded in death by her parents; her husband, Clarence McConnaughy; and a brother, Michael A. Hoge.
Visitation will be held from 1:00 to 8:00 p.m., Sunday, August 29, 2021 at Bryant Funeral Home. Funeral service will be held at 10:00 a.m., Monday, August 30, 2021, at Bryant Funeral Home, with Pastor Larry Schumacher presiding. Interment will be in Hillcrest Memorial Park, Great Bend. Memorials have been designated to Alzheimer's Association, in care of Bryant Funeral Home.
Condolences may be sent and notice viewed at www.bryantfh.net
Arrangements byBryant Funeral Home1425 Patton RoadGreat Bend, Kansas67530
Published by Dodge City Daily Globe from Aug. 25 to Aug. 26, 2021.
To plant trees in memory, please visit the Sympathy Store.
MEMORIAL EVENTS
Aug
29
Visitation
1:00p.m. - 8:00p.m.
Bryant Funeral Home
1425 Patton Road, Great, KS
Aug
30
Funeral service
10:00a.m.
Bryant Funeral Home
1425 Patton Road, Great, KS
Funeral services provided by:
Bryant Funeral Home
MAKE A DONATION
Please consider a donation as requested by the family.
MEMORIES & CONDOLENCES
Sponsored by Bryant Funeral Home.
1 Entry
Marsha was a big part of my childhood. She was a terrific Girl Scout leader and our troop was so fortunate to have her creativity and leadership. I learned a lot from membership in her troop. She was also one of my mom´s best friends. And truly a friend in need, unlike so many people. When mom became sick from cancer, she brought meals by the house, and would sit with Mom and visit. Through the years, I´ve seen many people get seriously ill, and the friends who stick around are the true angels on Earth. Marsha was certainly an angel. Condolences to Kyle and the family. Marsha was wonderful and will continue to live on in my memories of her.
Barbara King Williams
August 26, 2021
Showing 1 - 1 of 1 results