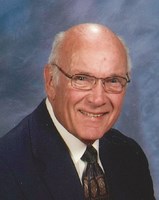 BORN
1936
DIED
2021
FUNERAL HOME
Ziegler Funeral Chapel - Dodge City
1901 N. 14th Avenue
Dodge City, KS
Ronald Reinert
Dodge City - Ronald Duane "Ron" Reinert, 85, died Sunday, September 26, 2021 at Western Plains Medical Complex, Dodge City.
He was born January 30, 1936 at Dodge City, the son of Leonard "Pat" and Dolla Mae (Houston) Reinert. He was a lifetime area resident, attended country school in his youth, and was a graduate of St. Mary of the Plains High School in Dodge City, also receiving two Bachelor's degrees from St. Mary of the Plains College – returning to one in mid-life for a career change. He farmed as a young adult, and for 15 years he owned and operated Ron's Tractor Service in Dodge City. He later worked as a Social Worker for Area Mental Health until retiring.
He was a very active member of the Cathedral of Our Lady of Guadalupe in Dodge City. He was also a member of Knights of Columbus Council 2955 and served on the Ford County Zoning Board. He was a board member of the Mullin Trust and a Trustee on the Richland Township for many years. In 1989 and 1990, he proudly served in the Kansas House of Representatives for the 115th District.
Ron loved life and people, never knowing a stranger. He always approached life with a sense of humor. Doubled over in a knee-slapping belly laugh was his favorite stance. His cherished moments included family - gatherings at home; pulling grandkids on the sled with his tractor; playing Pitch into the night - making wild bids "just to be social." He would debate any topic just for sport. Puttering in his shed and planting and tending to trees and greenery were great pleasures. Optimism and patience were his hallmarks.
On August 26, 1961 he married Rose Elaine Landry at Sacred Heart Cathedral in Dodge City.
Survivors include his wife of 60 years, Rose Elaine; their 5 children, Mark Reinert and wife Alice, Topeka, Kansas; their children Caitlin (Carl) Schwager, Austin (Bridget), Alexander, and Claire; Michelle Mahieu and husband Mark, Minneola; their child Coleen; Shawn Reinert and wife Cindy, Colby, Kansas; their children Hayden and Jenna; Brett Reinert and wife Janet, St. Louis, Missouri; their children Maxwell, Henry, and Lily; and Amy Reinert-Price and husband Cory, Dodge City; his sister, Katherine Zimmer and husband Don, Lawrence, Kansas, and two great-grandchildren, Amelia and Elaine Schwager.
He was preceded in death by his parents and a brother, Larry Reinert.
Vigil service followed by Knights of Columbus rosary will be at 7:00 pm Thursday, September 30, 2021 both at Ziegler Funeral Chapel, Dodge City. Funeral Mass will be at 10:00 am Friday at Sacred Heart Cathedral, 901 Central Ave., Dodge City with Fr. Rudin Din presiding. Burial will follow in Concord Cemetery, south of Dodge City. Visitation will be from noon to 7:00 pm Thursday at Ziegler Funeral Chapel.
The family suggests memorials to Area Mental Health Center and Sacred Heart Cathedral Catholic School in care of Ziegler Funeral Chapel, 1901 N. 14th Ave., Dodge City, Kansas 67801. Condolences may be sent to www.zieglerfuneralchapel.com
Published by Dodge City Daily Globe from Sep. 28 to Sep. 29, 2021.
To plant trees in memory, please visit the Sympathy Store.
MEMORIAL EVENTS
Sep
30
Visitation
12:00p.m. - 7:00p.m.
Ziegler Funeral Chapel - Dodge City
1901 N. 14th Avenue, Dodge City, KS
Sep
30
Vigil
7:00p.m.
Ziegler Funeral Chapel - Dodge City
1901 N. 14th Avenue, Dodge City, KS
Oct
1
Funeral Mass
10:00a.m.
Sacred Heart Cathedral
901 Central Ave., Dodge City, KS
Funeral services provided by:
Ziegler Funeral Chapel - Dodge City
MAKE A DONATION
MEMORIES & CONDOLENCES
Sponsored by Ziegler Funeral Chapel - Dodge City.
2 Entries
Prayers to the family.
Brian Carmichael
October 8, 2021
I offer my sympathy to you (Rose) and all your family. I don't know if you know, but you and Ron made life better for me in my time of need. I would like to thank you and your family for being part of my life and the life of my family. If there is anything I can do for you at this time or any time in the future, give me a call and I will be there. God Bless you all and may Ron rest in peace. Love Brad and Barbie Flax.
Bradley J Flax
Other
October 3, 2021
Showing 1 - 2 of 2 results