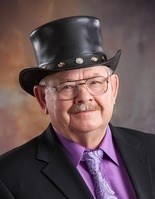 BORN
1946
DIED
2021
FUNERAL HOME
Swaim Funeral Chapel - Dodge City
1901 6th Ave
Dodge City, KS
Van A. Tenny
Dodge City - Van A Tenny, 74, of Dodge City, KS passed away Thursday, October 7, 2021, at the Kansas Heart Hospital in Wichita, Kansas.
Van was born December 16, 1946, in Dodge City, Kansas, the son of Willis and Mabel (Solze) Tenny. He was a graduate of Beeler Rural High School and attended Goodland, KS, VoTech where he trained as a diesel mechanic. He married Betty Jean Turley in 1967 in Arnold, KS. Van served in Vietnam from 1967-1969 with the US Army motor pool and was a lifetime member of the Ransom, KS VFW Post 7972.
Van was preceded in death by his parents and infant brother, Willis Duane. He is survived by his wife, Betty Tenny of Dodge City, KS; two daughters, Dawn Muncy and her husband Douglas of Enid, OK and Misti Elliott and her husband Darin of Haysville, KS; two sisters, Pat (John) Cashatt of Beloit, KS and Vesta (Gordon) Mull of Haymarket, VA; two granddaughters, Kaila Higgs of Yukon, OK and Paige Muncy of Norman OK, and two grandsons, Xander Elliott and Ian Elliott of Haysville, KS; five great grandsons, Kayden, Kyler, Kolton and Kooper Jayne and Declan Higgs, cousins, nieces, nephew, and a host of friends.
Van had a fondness for hats and he wore many of them in his lifetime; a cowboy hat as a child, a hood on his coveralls as he worked on the family farm near Beeler, KS, a soldier's helmet in Vietnam, a hard hat in the oil fields of western Kansas, a ball cap on the Ford County grader, his Vietnam Veteran hat every time he left the house, a motorcycle helmet on his beloved Harley, and a top hat when he drove the Dodge City Trolley Tours and on special occasions.
Van loved his friends fiercely and would get emotional about the unbreakable bonds and countless memories they shared. If you needed a hand he would offer it readily and without keeping a tab. He was a man of his word and honest to a fault. He loved his family and sacrificed often so that they might have a better life and a bigger dream. But Van never missed the important stuff. His family never wondered if they were loved. It was apparent in his affection for his wife of 54 years and his pride in his two daughters. And oh those grandkids and great grandkids! He could talk about them for hours. He was never afraid to say, "I love you" no matter who was around. Van was an engineer of life hacks and could fix just about anything or modify it to better suit the need. He loved his country and fought for it bravely. He rarely spoke of his time in the army and if he did, he was humble about his service.
Van continued his brave fight to the very end as he soldiered through the health conditions that took him too soon. He was a good man. Strong, steady, honest, fair and so very loved.
Memorial service will be held at the VFW in Dodge City on Friday, October 15, 2021 at 1:00 PM. Burial with military honors will follow at the Kansas Veterans' Cemetery in Fort Dodge. In lieu of flowers, memorials are suggested to the Ft Dodge Soldiers Home or the Pet Miracle Network.
Published by Dodge City Daily Globe from Oct. 13 to Oct. 14, 2021.
To plant trees in memory, please visit the Sympathy Store.
MEMORIAL EVENTS
Oct
15
Memorial service
1:00p.m.
VFW
Dodge City, KS
Funeral services provided by:
Swaim Funeral Chapel - Dodge City
MAKE A DONATION
MEMORIES & CONDOLENCES
Sponsored by Swaim Funeral Chapel - Dodge City.
0 Entries
Be the first to post a memory or condolences.