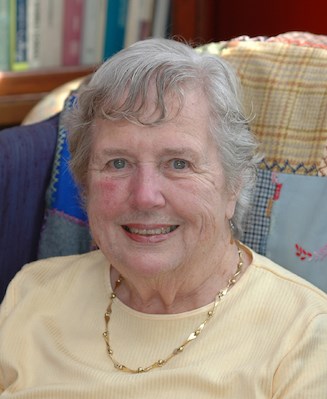 Sturgeon Bay - Carola Minar McMullen, beloved and generous civic leader, educator and artist, died on Thursday, December 3, 2020 in Sturgeon Bay, Wisconsin. After an eight-year battle with lymphoma, she succumbed to Covid. She was 94.

She was born in Eugene, Oregon in 1926 and educated across Oregon in Salem, Medford, The Dalles and Portland, ultimately graduating from Salem High School and Willamette University. At Willamette she was a proud Delta Gamma who majored in sociology and religion and minored in Spanish. She had the foresight to understand that Spanish language skills would enable her to make a difference in social services in the West. She met her husband, David W. Minar, in a Presbyterian church group and they were married in Portland in June 1948. She was a trainee in human resources at Lipman Wolfe in Portland in their first year of marriage while David finished at Reed College before moving to Berkeley for him to pursue a Ph.D. in political science at the University of California.

She continued her human resources career in the Office of the President at the University of California, working with legendary President Robert Gordon Sproul to establish the classification program that enabled the administrative restructuring of the U.C. into a system of multiple campuses.

As a faculty wife at Northwestern University, Columbia University, and the University of Washington, she was proud to host hundreds of students and faculty in her family's homes; she was an avid cook and baker, and could serve dinner for 50 or 100 with few hours' notice. She took great pride in the exchange of ideas at the dining table whether entertaining scholars and leaders or students and friends of her sons. Rather than avoid politics or religion at the table, she would be sure they came up.

After being widowed in 1973, she returned to her administrative career at Northwestern University, where she was Assistant to the Dean and Lecturer in the School of Education.

Several years after the death of her first husband, she married accounting and management educator Stewart Y. McMullen, who predeceased her in 1990. Carola and Stewart traveled the world, further stoking her interests in politics and culture. She traveled to six continents including Antarctica and most states of the U.S.

Throughout, she was active in civic affairs, from room mother to PTA president. She served seven years on the Wilmette, Illinois Public Schools District 39 Board of Education, including six as president, and eight years on the New Trier Township High School District 203 Board of Education, including two as president. She took a prominent role as a board member in union negotiations and through sometimes tumultuous labor issues bridged the needs of teachers and communities.

After more than thirty years living and working in the Chicago area, she chose to relocate to Door County, Wisconsin, where she and Stewart had previously purchased a vacation home, and she built a new home on Green Bay waterfront. She became active in the arts community in Door County, particularly around quilting, and was featured in the Door County Pulse article "The Politics of Making Quilts" in 2008. Again, no quilt class or gathering was complete without conversation about politics and religion, and Carola asserted the role of strong women, her own form of feminism, even while operating one or several sewing machines. She was a strong proponent of the advancement of women in their careers and professions.

McMullen was an active member of the teaching faculty of the Clearing in Ellison Bay, Wisconsin, both in its residential summer program and its winter programs, and taught also at the John C. Campbell Folk School in North Carolina, well into her 80s. She built a home in Sturgeon Bay with facilities to allow her to teach Clearing winter programs at home, creating a hub for quilting artists from around the region. Her talents and methods as a quilter, fabric artist and teacher were among her greatest prides. She established the original endowment for the Clearing, launching its first capital campaign. She was a generous donor to endowments at Northwestern University and Pomona College.

Foremost was her capacity to talk about and support her sons, who had lost their father early and whose strong maternal role model continued to shape them into adulthood. Close behind was her commitment to dogs, including survivor Teddy.

She was intrepid and kind. In fighting her cancer, well into her 93rd year she continued to drive herself to Chicago for experimental treatments at Northwestern Medicine. In a sense that explains everything about her desire to lead, to prevail and to survive. A beloved and remarkable force of nature has departed.

Private family services will be conducted at Dignity Memorial Park Cemetery in Skokie, Illinois, presided by the Rev. Dr. Stephanie Perdew of First Congregational Church of Wilmette, Illinois. A memorial service will be announced at a later date. Forbes Funeral Home is assisting the family with arrangements. Online condolences may be offered at www.forbesfuneralhome.com Memorials may be directed to the Minar Fund in Politics at Pomona College in Claremont, California or the endowment of The Clearing, Ellison Bay, Wisconsin.


Published by Door County Advocate from Dec. 10 to Dec. 16, 2020.
To plant trees in memory, please visit the Sympathy Store.
MEMORIAL EVENTS
To offer your sympathy during this difficult time, you can now have memorial trees planted in a National Forest in memory of your loved one.
Funeral services provided by:
Forbes Funeral Home & Cremations - Sturgeon Bay
MAKE A DONATION
MEMORIES & CONDOLENCES
Sponsored by Forbes Funeral Home & Cremations - Sturgeon Bay.
2 Entries
Carola and Dave were my parents-away-from home when I was in college at Northwestern and initially very homesick. Going from rural WY to NU was quite a culture shock, but the Minars took me in as a baby-sitter and then as a member of their family. I shared many meals at their home and was included in many social occasions. My "parents" gave me advice that sustained me during my time at NU. I absolutely adored the boys. They all traveled to WY for my wedding, where Tommy was my ring bearer. I was devastated to receive the call saying that Dave had passed on well before his time. To Tom and Ed, our deepest sympathies. Warm hugs, Jana
Jana Sackman Eaton
Friend
December 18, 2020
Carola and Dave were my parents-away-from-home when I was in college at Northwestern--and quite homesick initially. I loved them and their two sons, Tommy and Eddie. (Tommy was the ring-bearer in my wedding in WY.) I "baby sat" for them during my entire four years at NU and was often part of the family at meals and social occasions. One of my saddest moments was receiving the call telling me that Dave had passed away, well before his time. Tom and Ed, you have our deepest sympathy. Warm hugs to both! Jana Sackman Eaton
Jana Sackman Eaton
Friend
December 18, 2020
Showing 1 - 2 of 2 results