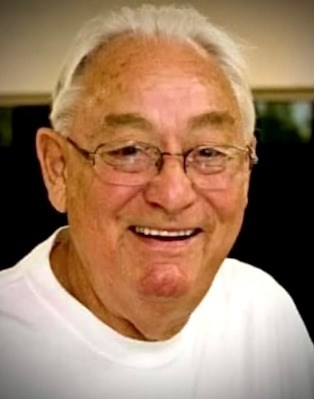 Scottsburg, IN - Gene A. Counard, 86, of Scottsburg, Indiana, left this earth surrounded by family on June 24, 2021. The eldest of seven sons born to Ervin and Julia Counard, he entered this world on March 3, 1935 in Brussels, Wisconsin.

Gene graduated from Brussels High School and joined the United States Army, where he served during the Korean War as a morse code intercept operator. After serving his country, he returned to Wisconsin where he earned a bachelor's degree from River Falls State College.

During his time at River Falls, Gene met Elva Petersen, whom he would marry. In their 63 years together, they have raised three beautiful daughters, Mary, Ann and Julie. A true family man, he enjoyed spending time with his kids, grandkids and great-grandkids. Through the years, Gene and Elva hosted numerous family dinners with Gene being the master chef, serving up the best mashed potatoes, pancakes or scrambled eggs anywhere. Just ask any grandkid! Enjoying friendly competition, Gene loved a good game of Euchre or Scrabble, but the favorite passion was golf. Gene and Elva enjoyed their retirement winters in Florida playing a lot of golf with friends.

Gene was a salesman for Ralston Purina Company for over 35 years and finished up the last 7 years of his sales career at Fibreworks Corporation in Louisville, Kentucky.

Gene was active in the Scottsburg community, serving as a member of the Kiwanis Club, Moose Lodge 2324, and was an original board member for the Scott County Family YMCA.

Military services for Gene will be held on July 24, 2021 at 11:00 a.m. at the Indiana Veterans Memorial Cemetery in Madison, Indiana. Immediately following, a Celebration of Life gathering will be held at the Clifty Inn in the Clifty Falls State Park nearby. Please bring your favorite memory or two of Gene to share. Feel free to wear any checkerboard attire you may have in honor of all of his checkerboard shirts and ties he wore during his years working for Ralston Purina Company.


Published by Door County Advocate from Jul. 2 to Jul. 10, 2021.
To plant trees in memory, please visit the Sympathy Store.
MEMORIAL EVENTS
Jul
24
Service
11:00a.m.
Indiana Veterans Memorial Cemetery
Madison, IN
Funeral services provided by:
Cremation Society of Indiana
MAKE A DONATION
MEMORIES & CONDOLENCES
Sponsored by Cremation Society of Indiana.
1 Entry
I m so sorry to hear of the passing of Gene, you have my sympathy from my heart, to all the family. Take care
Carmon L Richardson
Family
July 14, 2021
Showing 1 - 1 of 1 results