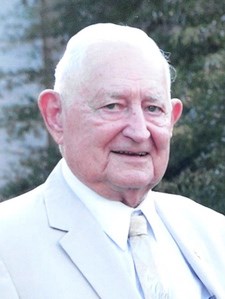 Funeral services will be held on Monday, July 26, 2021 at 2:00 pm at First Presbyterian Church with Rev. Rob Oates and Rev. Caleb Galloway officiating. Burial with Military Honors will follow in Memory Hill Cemetery. The family will receive friends at the church for one hour prior to the service.

Albert was born in Muskegon, Michigan on January 23, 1930 to the late Gilbert Benjamin Krienke and to the late Marie Katherine Vogl Krienke. The family moved to Owatonna, Minnesota when Al was young. He spent his childhood in Owatonna then moved to Port Orchard, Washington at the age of 14. After graduating high school, he enlisted in the Army. The first 10 years he worked in the motor pool. The last 11 ½ years, he was a fixed-wing pilot, helicopter pilot, instructor pilot and test pilot. While in flight school at Fort Rucker, he met the love of his life, Jane Thornton. They married on April 6, 1957. They had three children, Allen, Dawn and Jerri. He served one tour in Vietnam as a helicopter pilot. Al was shot down and wounded for which he received a Purple Heart and Distinguished Flying Cross Medals. After retiring from the Army, he settled in Dothan. He received a Bachelor in Arts degree in Business Administration with a minor in Accounting from the University of Alabama. His second retirement was with the Revenue Department of the State of Alabama as a Tax Examiner.

He was a member of First Presbyterian Church since 1980. The church members were special to him and close to his heart.

To plant trees in memory, please visit our Sympathy Store.
Published by Dothan Eagle on Jul. 25, 2021.
MEMORIAL EVENTS
Jul
26
Visitation
1:00p.m.
First Presbyterian Church
, AL
Jul
26
Funeral service
2:00p.m.
First Presbyterian Church
, AL
Funeral services provided by:
Sunset Memorial Park, Funeral Home and Crematory, LLC
MAKE A DONATION
MEMORIES & CONDOLENCES
Sponsored by Sunset Memorial Park, Funeral Home and Crematory, LLC.
3 Entries
Dear Ms. Jane: I leaned just this morning of sweet Mr. Al´s death. Please know that my heart breaks for you, your children and grandchildren. We have lost a very special man. It´ might be possible we lived at Fort Rucker at the same time and Al and Nick´s paths might have crossed. Nick served in Vietnam in 1965-66. He was a flight surgeon at Fort Rucker from 1968 until 1975 when we lived on Logan Street. He decided to take a different path and completed a residency in ophthalmology, returning to Rucker from 1978 until he retired on1983. He was also one of the two flight surgeons attached to the Silver Eagles. If we were not neighbors then, we will be in the future in the Military section at Sunset under the helicopter You snd your family will be remembered when we say our evening prayers, praying that the long, beautiful marriage you shared and the wonderful memories you have will sustain you until you meet again.
Eileen Barreca, a fellow Cardiac Rehaber.
Other
July 26, 2021
Jane, I'm so sorry for your loss.
Tolbert Goolsby
July 25, 2021
May the love of God, friends and family carry you through your grief. I am sorry to hear of your loss. Please accept my condolences. 2nd Thessalonians 2:15, 16.
DT
July 22, 2021
Showing 1 - 3 of 3 results