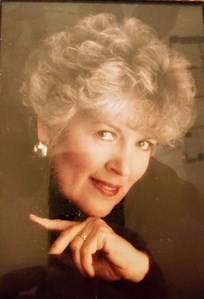 Lizz, an Albuquerque resident since 1989, was born in Lawton, Oklahoma on November 7, 1941 to Lieutenant Samuel A. Miller and Willetta Couch / Miller.

Lizz was the child of a career Army officer and grew up moving wherever the Army sent her father. She lived at Ft. Sill, Oklahoma, Ft. Bragg, North Carolina, Cheyenne, Wyoming, and Ft. Rucker, Alabama. In 1947 Lizz, her mother and brother joined her father in Germany where he was serving in the post WWII constabulary. She was among the very first group of American families to live in Germany after the war.

In 1958 her father was stationed at Ft. Rucker, Alabama where Lizz graduated from Enterprise High School. Lizz was selected as 'Miss Alabama Education Association' in 1960. Upon graduation Lizz enrolled at Troy State University, and met a young Army aviator, Lieutenant Clydie 'Joe' Crawford. Lizz and Joe were married on May 7, 1961 and Lizz once again packed her bags and began the gypsy life of an Army Wife. Lizz watched her husband go to Vietnam twice, and during that time worked to raise 2 sons on her own. Her life as an Army wife took her around the U.S. and indeed around the world. She cared for her family in such diverse places as Ft. Rucker, Ft. Benning, GA, Ft. Sam, Houston TX and for over 10 years back in West Germany.

Lizz was an athlete and an adventurer. Lizz loved to travel, (she visited almost every Western European country). She was an avid skier, water skier, golfer and hiker. Lizz challenged the slopes of the Alps as well as Colorado, Vermont and her beloved NM. Lizz, (always ready for something new), tried sky diving and bungee jumping (both after her 50th birthday). After moving to Albuquerque in 1989 Lizz set a goal to hike the highest peaks in New Mexico …. A goal she accomplished in the first 3 years she was there.

Lizz worked diligently as a volunteer at every base the Army sent her and her family. She worked with the Red Cross, the local school systems and as a volunteer parent for her sons athletic teams, (she was a great baseball score keeper and statistician). She received numerous volunteer awards but was perhaps most proud of being the first recipient of the U.S. Army Aviation Katherine Wright Award for outstanding support to Army Aviation. Lizz continued her commitment to community in Albuquerque as a volunteer with the Zoo and with the New Mexico Arts and Crafts fair.

Lizz is pre-deceased by her parents, her brother Keith Miller, and her son Clint Crawford.

Lizz is survived by her husband of 61 years Joe, her son Cliff Crawford, granddaughters Chantel, Erin, and Amanda as well as great grandchildren Baylor and Lena Pruett.

There will be an interment ceremony on Nov. 7, 2021, 13:00 at Gardens of Memory Cemetery in Headland, AL.
Published by Dothan Eagle on Oct. 13, 2021.
To plant trees in memory, please visit the Sympathy Store.
MEMORIAL EVENTS
Nov
7
Interment
1:00p.m.
Gardens of Memory Cemetery
Headland, AL
Funeral services provided by:
Affordable Cremation and Burial - Albuquerque
MAKE A DONATION
MEMORIES & CONDOLENCES
Sponsored by Affordable Cremation and Burial - Albuquerque.
0 Entries
Be the first to post a memory or condolences.