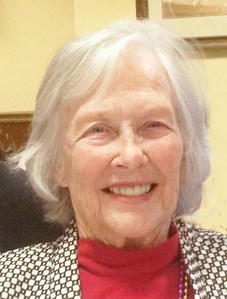 DOTHAN…Patricia Harris (Pat) Crenshaw, a resident of Dothan, passed away peacefully early Tuesday morning, September 14, 2021, at Extendicare Health and Rehab Center with her loving family by her side. She was 83.

Funeral services will be held at 11:00 a.m. Friday, September 17, 2021, in the Holman Headland Mortuary Chapel with her brother-in-law, Dr. Richard E. Worsham officiating. Visitation will be one hour prior to services at the mortuary. Interment will follow in Gardens of Memory between Headland and Dothan. Social distancing and masking guidelines will be observed.

Serving as active pallbearers will be her grandsons and son-in-law.

Patricia Harris was born December 13, 1937 in Haleburg, AL, to Arthur Lee and Mary Evelyn Dukes Harris. After graduating from Houston County High School, she attended Troy University. This young college freshman from rural Henry County, on her first day of class, met a handsome junior classman, Gillis Crenshaw, Jr. After this meeting, she commented to her best friend, that she would marry him before she left Troy. The rest is history, as they began dating and later married. Truly love at first sight.

After marriage, they moved to Atlanta, where Gillis attended the Candler School of Theology at Emory University. Pat was a true pastor's wife, and together, they served churches in the Alabama-West Florida Conference of the United Methodist Church for over 50 years. In her later years, Pat worked as a substitute teacher in the Dale County School System, and was employed with Dothan City Schools for 15 years, serving in various capacities. She loved to sing in the church choir, play the piano, garden, fish and cook for her family. Known to her grandchildren and great-grandchildren as "Nana," she will be remembered as an above average southern cook, who made the best cornbread dressing ever, among other things. Her daughter, Mary, and granddaughter, Carlie, continue to try to duplicate her dressing and often say, "It's almost like Nana's." In addition to being a fierce Auburn football fan, she loved eating lemons with salt, tomatoes right off the vine, green plumbs and boiled peanuts. Chicken fingers ranked high on her list as well, a true "country girl."

The family would like to express their sincere and profound thanks to Extendicare Health Center and the entire staff, especially Hall 7, for the love and dignified care shown to Pat over the past seven years.

At a Miss Extendicare Pageant, when asked what she would change about her life if she could go back in time, she replied, "I would not change anything about my life." What an unusually wonderful testament to a life well lived.

Holman-Headland Mortuary & Cremations is in charge of arrangements. Phone 334-693-3371.