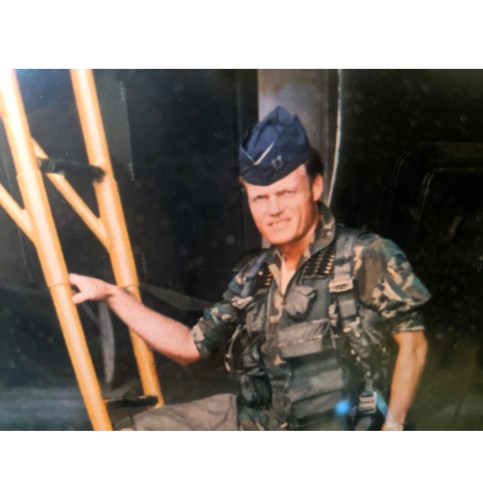 BORN
1942
DIED
2021
Captain James C Butts, born December 13, 1942 in Minneapolis to Clinton and Gayle Butts, left this earthly world peacefully with his wife and son beside him on July 24, 2021. He lived life to the fullest... and then some. He was a fighter to the very end. His presence was large and encompassed many.

Jim, Buttsie, Pardsie, Dad; he answered too many titles and nicknames, but his favorite was a friend. Jim never met a stranger, everyone was a friend. Then there were the special friends- you know who you are. He cherished memories with all of you.

Captain Butts was a proud pilot in the United States Air Force; he commanded his favorite "Phantom F-4E." He earned his Distinguished Flying Cross medal on February 19,1971, protecting his fellow ground troops with multiple passes, saving the lives of many "brothers." There were other medals awarded to him during his service as he flew 201 missions, the last being his hardest. Jim formed many lifelong relationships while enlisted. He was proud to have served.

After his service, Jim moved to Steamboat, CO where he met his first wife Nancy and his step-children, Terrell and Will. It was here he started his life in the retail business with one of his best friends Ben Hambleton. He was grateful for all the mentoring Ben offered. They continued their friendship and connected frequently. Jim moved on to mentor many others, a role that provided his proudest achievements.

Jim moved to Durango, and in 1980 his son Jason was born. He was a family man and was so proud of his children. In 1987, Jim met his second wife, "the love of my life" Rachel Thomas. They made it official in 2006. As he said, "I just want to get this one right." They were blessed with 32 wonderful years together. His last wish was to leave this world at home with Rachel by his side. Those wishes were granted.

Jim was a fighter pilot, business owner, father, step-father, husband, brother, son, and mentor. He was preceded in death by his sister Marilynne (Ford) and brother Bill, father Clinton, and mother Gayle (Butts). He is survived by his son Jason, wife Rachel, multiple nieces, nephews, and extended family.

He will be missed forever, but we know he is in a better place, watching down upon us all. He requested no funeral, but as his life touched so many, there will be a tribute at a later date.

He was graciously taken care of by our local Hospice nurses and staff. In lieu of flowers, donations may be made to Mercy Hospice Foundation.

Fly high Buttsie, Pardsie, Dad, Honey...we know you know-how. We will stay and hold down the fort until we see you again.
Published by The Durango Herald on Aug. 31, 2021.
To plant trees in memory, please visit the Sympathy Store.
MEMORIAL EVENTS
To offer your sympathy during this difficult time, you can now have memorial trees planted in a National Forest in memory of your loved one.
MAKE A DONATION
MEMORIES & CONDOLENCES
8 Entries
Please accept our family´s sincere condolences. We were all saddened to hear of Jim´s passing. He was a good friend to my parents Joe and Clorinda. His kindness won´t be forgotten.
Ed Archuleta
September 7, 2021
What a gift Jim was to his family, friends and our country. What a gift you were to him, Rachael. We are so sorry for your loss, Rachael and Jason. Carol & Larry
Carol and Larry House
September 4, 2021
So sorry for the loss of our cousin Jim. He was such a special guy with a lot of carisma. May God bless and comfort his family and loved ones.
Barbara Blanch Savage
Family
September 4, 2021
Deepest sympathy to Rachel and Jason. RIP Pardsie
Scoop
Friend
September 3, 2021
Rachel. Jim was so special to us and we know you must be grieving terribly. Please know we are thinking of you and wishing you peace. Fondly, Pat and Jan
Pat and Jan Murphy
September 2, 2021
The Buckley SFB military Retiree Activities Office (RAO) would like to offer our sincere condolences and our gratitude for Capt Butt's distinguished service to our country in the Air Force. If you would like help with any matters related to casualty assistance, Defense Finance & Accounting Service, Survivor Benefit Plan (SBP), Veterans Affairs (VA), etc. you can contact our office on Buckley SFB at 720-847-6693. The RAO is staffed by volunteers, all military retirees themselves, and our sole purpose is to provide assistance to any military retirees and surviving spouses/family members with anything related to their military service and/or benefits, in particular during difficult times such as this. We are deeply sorry for your loss. Steve Young Lt Col, USAF, Ret Director, Buckley SFB RAO
Steve Young
September 1, 2021
Jim was a true mentor with a great smile and twinkle in his eye. I learned so much about not just how to excel working in retail, but how to be a stand-up person & employee. He will be missed and I hold my memories of times with him very dear. Much love to you, Rachel & Jason.
Erin White Sinberg
Work
September 1, 2021
So sorry to hear this news. You all are such special people to our family. I am sure my mom welcomed him with a plate of cookies. She loved her "Cookie Man"
Myra Herrera Hunt
September 1, 2021
Showing 1 - 8 of 8 results