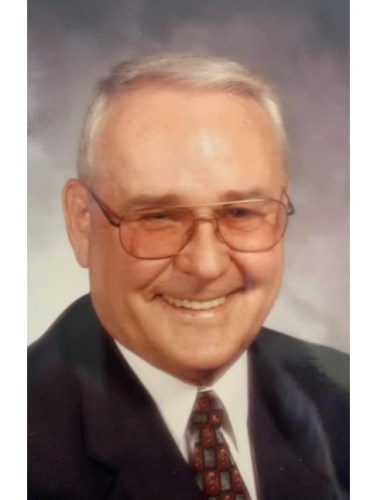 BORN
1935
DIED
2021
With heavy hearts, we announce the passing of Henry "Hank" Eldon Randall on August 22, 2021, after a long and courageous battle with Alzheimer's. He was 86. Hank was born on March 5, 1935, to De Royce Austin and Clara Belle Randall and was raised in Durango, CO. He graduated Durango High School in 1953 before moving to AZ. He was always known for his gentle nature, wonderful laugh, his happy-go-lucky personality, and his marvelous sense of humor. These attributes served him well in his professional life for many years as a bank manager in Sun City. After retiring from banking, he became a successful realtor also in Sun City. He always had a deep love for his wife and family. He is survived by his beloved wife Barbara of 51 years, his children, Keith & wife Becky, Kevin, Kim, 8 grandchildren, 6 great-grandchildren, his sister Beverly St Clair of Durango, CO. He is preceded in death by his parents, older brother Earl Randall and younger brother Kenny Randall. A Celebration of Life will be held on September 30, 2021, at 1:00 PM at Grace Bible Church, 19280 N 99th Avenue, Sun City. In lieu of flowers, donations can be made to D-Amore Hospice, LLC, or the Alzheimer's Association Association Southwest Chapter in Phoenix.
Published by The Durango Herald on Sep. 22, 2021.
To plant trees in memory, please visit the Sympathy Store.
MEMORIAL EVENTS
Sep
30
Celebration of Life
1:00p.m.
Grace Bible Church
19280 N 99th Avenue, Sun City, CO
MAKE A DONATION
Please consider a donation as requested by the family.
MEMORIES & CONDOLENCES
0 Entries
Be the first to post a memory or condolences.