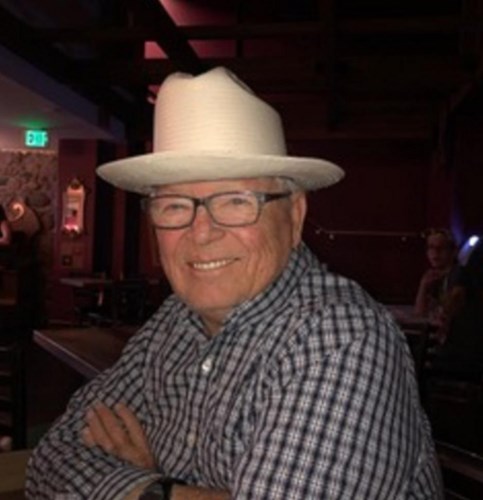 BORN
1946
DIED
2021
FUNERAL HOME
Hood Mortuary - Durango
1261 East Third Avenue
Durango, CO
UPCOMING SERVICE
Celebration of Life
Aug, 7 2021
5:30p.m.
Powerhouse Museum
Send Flowers
Thinker, reader, and Jeopardy aficionado Michael E. McLachlan passed away June 23, 2021 from the fight between his heart, his kidneys and the rest of his body. Born in Dover, DE on April 18, 1946, Michael was the second of six children born to U.S. Air Force Colonel Joseph and Audrey McLachlan. They spent their childhoods living on various bases around the world, giving Michael a sense of global awareness and the value of friendship, no matter how long he knew a person.

At six months old, the McLachlans moved to Munich, Germany, and during the next five years they lived in San Antonio, TX, Dayton, OH and Pittsburg, PA, where Michael attended the first grade. He continued his schooling in Arlington, VA and Tampa, FL. In 1959, the family moved to Zaragoza, Spain, where he attended the 8th through 11th grades. While there, he developed deep and enduring friendships, which he maintained the rest of his life.

The family moved to Lincoln, NE, in 1963, where Michael graduated from St. Pius X High School. He attended the University of Nebraska for one year until August 1965, when he joined the U.S. Marine Corps. His life changed after spending a year fighting in Viet Nam, while assigned to the 3rd Anti-Tank Battalion in Danang, Phu Bai, Quantri Province and JJ Carroll Artillery Base in the DMZ. He was one of a few survivors of a plane crash, and was released on April 10, 1967 to return home. He was stationed in the Marine Barracks in Portsmouth, VA, discharged in August 1967. He was awarded the Vietnam Service Medal, 3rd Marine Expeditionary Force, and Navy Commendation Medal.

He left the DA's office in May 1976 to work with Bruce Kilpatrick, then joined the law firm of Hamilton Sherman Hamilton & Shand, where he worked for 19 years. There, he did all types of litigation and criminal work, divorces and insurance defense. When he left in 1995, the firm was known as Hamilton Shand & McLachlan.

Michael formed a partnership with Michael Goldman in 1995 as La Plata County Attorneys. He then joined Colorado Attorney General Ken Salazar's office in 1998 as Solicitor General. While there, he was honored to make oral arguments in front of the U.S. Supreme Court, in Hill vs. Colorado, which he won in June 2000. He then returned to Durango, where he formed his own law firm with Marla Underell and Jim Whitley, and practiced for the next 20 years. He took involuntary retirement in late 2019 due to health reasons.

Michael was elected as a Colorado State Representative for District 59, where he proudly served for two years. During his impressive legal career, Michael was chair of the Colorado Supreme Court Grievance Committee; a 15-year recipient of the Best Lawyers of America award; a Fellow in the International Society of Barristers; consistently received the highest professional rating by Martindale and Hubble; a member of the American Board of Trial Advocates, recognized for 57 civil jury trials brought to a verdict; a member of the U.S. Supreme Court Historical Society; and a 12-year member of the Judicial Performance Commission for the Sixth Judicial District. He was also a 30-year member of the Durango Evening Rotary Club, where he was President and named a five-time Paul Harris Fellow.

He worked on the Durango City Charter Commission in 1977, on the state civil jury instruction committee for eight years and on the Southern Ute Tribe-State of Colorado Environmental Control Commission.

Michael married Dixie Self in 1968; they divorced in 1971. He married Deborah Cowan in 1975; they divorced in 1981. He married Barbara Hall in 1984; "The greatest thing in my life. Best thing that ever happened," he said often. He is preceded in death by his father, Joseph, and mother, Audrey McLachlan; brother Joe McLachlan; sisters, Peggy Applegate and Patty McLachlan; and nephew, Coval Johnson. He is survived by his wife, Barbara; son Brian (Tracy); daughter, Kate; brother Tom (Rita); half-sister Meeghan Carter (Les); stepmother, Nadine McLachlan; and numerous nieces, nephews, great nieces and great nephews.

A Celebration of Life will be held at 5:30 p.m. August 7, 2021 at the Powerhouse Museum, because hugs and uproarious laughs on Michael's behalf will be warranted. Donations may be made in Michael's honor to the La Plata County Boys and Girls Club or Planned Parenthood.

Michael liked to quote Teddy Roosevelt: "It is not the critic who counts; not the man who points out how the strong man stumbles, or where the doer of deeds could have done them better, The credit belongs to the man who is actually in the arena, whose face is marred by dust and sweat, and blood; who strives valiantly; who errs who comes short again and again, because there is no effort without error and shortcoming."
To plant trees in memory, please visit our Sympathy Store.
Published by The Durango Herald on Jun. 24, 2021.
MEMORIAL EVENTS
Aug
7
Celebration of Life
5:30p.m.
Powerhouse Museum
, CO
Funeral services provided by:
Hood Mortuary - Durango
MAKE A DONATION
MEMORIES & CONDOLENCES
Sponsored by Hood Mortuary - Durango.
8 Entries
Dear Barb, Brian, Katie and Family, Sending my sincere condolences on Michael's passing. Besides being a great American, he was more importantly, your loving husband and father. May your memories sustain all of you through these trying times.
Gregg Janus
Work
July 3, 2021
My condolences to the family and many friends of Michael McLachlan. I´m grateful to have memories of many years of working with him on many occasions and especially when jousting as to the friendly competitions between Rotary and Kiwanis. I think he was very special.
Lee Taylor
June 30, 2021
You and your family are in our thoughts and prayers. Take care of each other. With love,
The Scalf family
June 26, 2021
I knew of some of Michael's accomplishments, his military service, his legal brilliance, but I knew more. His beautiful smile that lit up everything around him never failed to bring my best to my face. His rapier wit and and the sense of humor that accompanied it were a joy. The bringing of Barb into the lives of my my family especially my grandchildren was indeed a thing to make a difference in Durango schools and La Plata county. I am saddened by his death but will hold him and his family in my heart always!
Ann Perkins-Parrott
Other
June 26, 2021
Heartbroken to see this news on the Herald website. I am blessed to have known Michael as a client, friend and lawyer and hope the family finds comfort in knowing he was loved and respected by many. Sending my love to Barbie and the family from Whakatane, New Zealand.
Betsy Stephens
Friend
June 26, 2021
Great admiration for our friend and neighbor, Mike, for a life well lived. And to his family, who honored his last wishes. Rest in peace, Michael.
Dorothy and Bill Tarpley
Friend
June 25, 2021
I knew Michael was an amazing man but unfortunately the obituary enlightened me to so much more. I am glad I got to see him in recent times still sharp with great recollection. Cherish the memories. I send my sincere condolences to all the family.
Cheryl Schlabach
Friend
June 25, 2021
God why did you take Mike? We guess you had a good reason but he was much too young and full of energy. Hugs and prayers for family and friends of Mike . We already miss him a lot. My daughter Kristen really misses him. Rest well my friend. We will see you on the other side
Barney and Phyllis Anderson
Friend
June 24, 2021
Showing 1 - 8 of 8 results