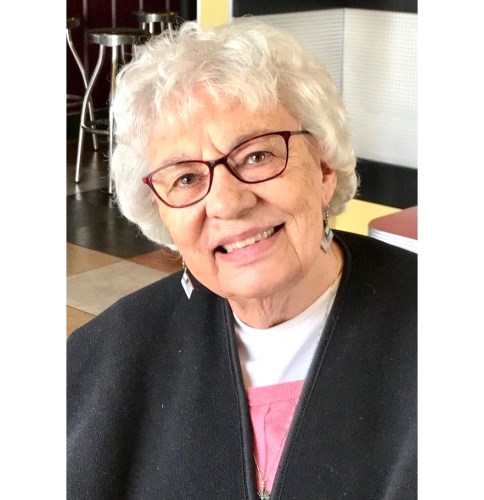 BORN
1933
DIED
2021
Virginia Lee Montgomery Peterson, 88, a long-time resident of La Plata County, passed away on July 25, 2021 in Longmont, Colorado from natural causes. Virginia was born to Guy and Hilda Montgomery at her family's home in Willard, Colorado on February 13, 1933 during a blizzard that kept them from being able to get to a hospital. She spent her early years on the high plains in the Willard area, and then the family moved to a ranch near Akron, Colorado where she spent the majority of her childhood. The family raised cattle and buffalo, and Virginia learned to work hard, appreciate solitude, trick rope, and to protect livestock from rattlesnakes. As a young girl, she developed a love of books, and was a voracious reader her whole life.

Virginia graduated from Akron High School in 1951. After high school, she participated in the International Farm Youth Exchange (IFYE), living with multiple families in Belgium. Later, she went on to get her Bachelor's Degree in English from Colorado A&M (now Colorado State University) in Ft. Collins where she formed tight and lifelong friendships with some of her Delta Delta Delta sorority sisters. Later, she acquired her teaching licensure from the University of Northern Colorado in Greeley. While in Greeley, a friend in her dormitory arranged a blind date between her brother, Noel Peterson, and Virginia. The two fell in love, married, and soon settled on Florida Mesa near Durango where they gradually acquired property to form a small "ranchette" where they raised horses, hay, and some cattle.

Virginia taught English and other subject areas at Smiley Junior High in Durango, but stopped teaching to raise their children: two daughters and twin boys. Virginia was a devoted and loving mother whose enthusiasm for many different types of music flowed over to her children. Virginia served as a piano accompanist for school choirs and worked as a substitute teacher at Florida Mesa for many years before opening the Iron Wheels Mercantile gift store with her friend, Mona, near the train depot in Durango. Virginia and Mona ran the store from 1978 through 1988.

Upon retiring from Iron Wheels Mercantile, Virginia worked at the Galloping Goose Gift Shop and then as a long-standing volunteer at the United Methodist Thrift Shop, run by the church she attended most all of her adult life. After the passing of her husband in 2017, Virginia moved to Boise, Idaho to be near her daughter and her family, and then, in recent months, moved to Longmont, Colorado to live at Balfour Senior Living Center near her daughter and son.

Virginia was preceded in death by her husband of 59 years, Noel, her parents, Guy and Hilda Montgomery, and her brother, Jack Montgomery. She is survived by their children: Kristin Saenz of San Antonio, Texas; Karen Schmader of Longmont, Colorado; Daniel Peterson of Starkville, Mississippi; and Dale Peterson of Longmont, Colorado, their spouses, and eight grandchildren.

There will be a celebration of the life of Virginia Peterson from 3:00 - 5:00 p.m. on Sunday, August 8 in the ballroom of the Doubletree Hotel, 501 Camino Del Rio, in Durango. Coffee and dessert will be served. Her family would be honored for her friends and family to attend and celebrate this remarkable person and the impact she has had on so many.

Memorial contributions can be made to St. Jude Children's Research Hospital, https://www.stjude.org/, or the McCurdy Methodist Ministries, https://mccurdy.org/.
Published by The Durango Herald on Jul. 28, 2021.
To plant trees in memory, please visit our Sympathy Store.
MEMORIAL EVENTS
Aug
8
Celebration of Life
3:00p.m. - 5:00p.m.
Doubletree Hotel Ballroom
501 Camino Del Rio, Durango, CO
MAKE A DONATION
Please consider a donation as requested by the family.
MEMORIES & CONDOLENCES
2 Entries
My deepest condolences. She always had a big smile fir everyone.
Susan Schmittel-Hillmeyer
September 15, 2021
My deepest sympathy to Dan, Dale, Karen and Kirstin. Your mother was a good friend and I always loved seeing her. Your parents both were good friends of the family and I share your grief. God Bless you all.
Sheri Wyatt
Friend
July 29, 2021
Showing 1 - 2 of 2 results