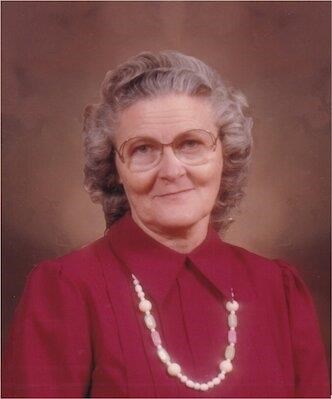 Iris was born February 1, 1931 in Blanding, UT to Harvey John Kartchner and Thelma Horne Kartchner. She graduated from San Juan High School in Blanding, Utah, where she played the tenor saxophone under the baton of her father. Very shortly after graduating, she married her sweetheart, Leon K Johnson on June 15, 1949 in the Salt Lake City Temple. The early years of their marriage were split between Blanding and Salt Lake City, where Leon was attending LDS Business College. They moved to Colusa, CA in 1952, where they soon bought an 11 acre almond and walnut orchard and built a home. There, their family continued to grow. For a while, Iris was the Primary president in the little Colusa Branch, and Primary was held in their home. For a few years, they had a milk cow and raised their own beef and chickens.

The family moved to Cedar City in 1973, where the younger children grew up and became adults. The home was always an active place, filled with love, energy, work, music, and fun.

Iris was a devoted daughter, and provided constant care to her mother in the months before she died of cancer.

Iris held many church callings, and drove countless miles to transport children to church meetings and activities. After the children were gone and Leon retired, Leon and Iris served a mission for the Church of Jesus Christ of Latter-Day Saints in the Canary Islands, a province of Spain off the African coast. Iris diligently studied her Spanish lessons, and retained her Spanish skills better than she gave herself credit for. In fact, she was better at many things than she gave herself credit for.

Iris was critically injured in a vehicle accident in 1994, which left her with life-changing, permanent disabilities. She once again proved to be a strong woman, and repeatedly exceeded doctors' expectations. She bravely and steadfastly adapted, persevered and endured, and continued to live independently for several years.

After recovering from their injuries, Leon and Iris moved to St. George, where they completed their temple mission and enjoyed their retirement years. They moved to an assisted living facility in Bountiful in 2011, where they lived much closer to some of their children. After Leon died in April 2015, Iris lived with Rexine (and Mal) in Colorado Springs for several months before moving into Beehive Homes of Payson, again closer to several family members, where she could receive the professional care she required.

Iris was a hard worker and a strong woman, and was a credit to her pioneer heritage. She proved many times over that she was skilled at making tasty meals with whatever was on hand. She bottled hundreds of quarts of fruit and vegetables for her family, teaching her children at every step. She sewed countless performance costumes, wedding dresses and other wedding wardrobe articles. She loved music and singing, but she mostly loved her family. She has left a remarkable legacy and a grateful posterity.

The family extends heartfelt thanks to the caregivers at Beehive Homes of Payson and Bristol Hospice for their attentive care during Mom's sunset years.

To those who plan to attend any of these events, the family wishes to stress the importance of wearing a mask and observing social distancing guidelines while indoors. This is not a political statement, but is out of respect to others in attendance and as urged by the local leaders of those who attend church services in the building. There will be a livestream of the funeral service for the benefit of those who are sheltering in place, who will be unable to travel to these events, or who choose not to attend because of the attendance limit of 150 people. The details for the livestream will be posted on the Brown Family Mortuary website (brownfamilymortuary.com).