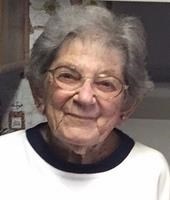 BORN
1921
DIED
2021
Bernice Lewis
June 7, 1921 - November 16, 2021
Resident of Bethel Island, CA
After a life well-lived, Bernice Lewis died suddenly, but peacefully, at the age of 100.
Bernice was predeceased by her parents Morris and Helen (Brill) Gewirtz, first husband Herbert Goldstein, husband Ralph Lewis, stepson David Lewis, and step-grandson Steven Lewis.
She is lovingly remembered by sons Jay Goldstein (Carol) and Jed Goldstein (Charlotte Spade), stepdaughter-in-law Marilyn Lewis, stepdaughter Jilda Lewis, stepson James Lewis, four grandchildren, seven great-grandchildren, and many other relatives. Bernice will be greatly missed by her canine companion Buddy.
Bernice was raised in San Francisco's Mission District. Growing up during the Great Depression shaped her life-long commitment to social justice. She went to Girl's High School, where she learned to be an excellent typist. She attended San Francisco State College for two years before marrying Herbert Goldstein in 1941. During WWII she lived in the Presidio where Herb was serving in the U.S. Army, and where her first son (Jay) was born.
After the war, they lived in Santa Monica, California, where her second son (Jed) was born. They moved back to San Francisco and then, in 1953, to Champaign, Illinois. Bernice was a secretary in the Psychology Department at the University of Illinois while Herb was going to graduate school. After he graduated the family relocated to Piermont, New York in 1962. Bernice worked at Lamont Geological Observatory in Palisades, NY, for several years.
When their marriage ended, she returned to San Francisco in 1971, and went to work at Sinai Memorial Chapel. It was there that she met Ralph Lewis. They married in 1973, and in 1983 moved to Bethel Island, where she resided until her passing. Bernice and Ralph enjoyed boating on the Delta, helping out in boat racing events, touring N. America in their Bluebird motorhome, and going on cruises. She was involved in the community as an active member of the Bethel Island Women's Club. She used her talent for crocheting to make baby blankets that kept her grandchildren warm and comforted at night (for more years than they would like to admit). Later on, she made blankets and caps for newborns, which she donated to local hospitals.
Bernice was very frugal when it came to herself, but extremely generous to others. She was a supporter of progressive causes but never sought to impose her opinions on others. Above all, she was an optimist who believed that it was unproductive to worry because things would ultimately turn out for the best (and for her, they usually did). Her optimistic outlook played a big part in her recovery from serious injuries sustained in an automobile accident at the age of 97.
The family wishes to extend our gratitude to the many friends and neighbours who helped Bernice to realize her wish to live out her life in her own home. Special thanks to: Betty, Chris, Christina, Chuck, Diane, Hal, Jeannie, Leonard, Pat and Joe, Penny, and Vicky.
There will be a private celebration of Bernice's life by family members at a future date. In lieu of flowers, donations in her memory can be made to a charity of one's choice.


View the online memorial for Bernice Lewis
Published by East Bay Times on Nov. 26, 2021.
To plant trees in memory, please visit the Sympathy Store.
MEMORIAL EVENTS
To offer your sympathy during this difficult time, you can now have memorial trees planted in a National Forest in memory of your loved one.
MAKE A DONATION
Please consider a donation as requested by the family.
MEMORIES & CONDOLENCES
Sponsored by East Bay Times.
2 Entries
she was the best auntie ever.
Marcy Sophia Voyevod
November 28, 2021
I have known Bernice since probably 2008. She was a great great friend and neighbor I keep looking over through my office window towards the house like I always have hoping she was doing okay it's very sad to see this she lived a good long life but still it's hard to accept she had a lot of good friends here I'm going to miss taking her holiday meals or any type of meals that I would take just because she was always my first stop especially Thursday when I was passing out Thanksgiving dinners I had to skip the house but good fun memories of her will never be forgotten God bless everyone today is Saturday have a great day God bless you Bernice may you fly high with your fellow angels and the ones that we have lost already until we meet again you take care
Leonard J Hernandez
Friend
November 27, 2021
Showing 1 - 2 of 2 results