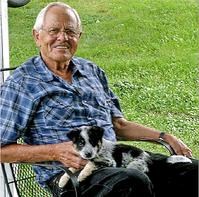 FUNERAL HOME
Hitchcock Funeral Home
212 Grand Avenue
Burwell, NE
John Joseph Mayer
Formerly of Oakland, California
John Joseph Mayer, 84, passed peacefully in his sleep, on Tuesday, May 28, 2019 in Burwell, NE, following recovery of heart by-pass surgery. John was born July 29, 1934 to Paul and Theresa (Sigl) Mayer in Lefor, North Dakota. He grew up on a small farm in Lefor, ND, helping with the chores, working in the fields and playing baseball. In 1942 the family moved to Sacramento, CA. In 1952, John graduated from Christian Brothers High School. He married Shirley Landenberger, the love of his life, in 1956. John was called to active duty in the U.S. Navy in 1957. While he was stationed in Guam from 1957-1959 Shirley joined him. After the Navy, John worked at Pacific Motor Trucking Co. (PMT). He worked his way up the trucking ranks and was a proud operations manager. He was very active at his local gym in Oakland, CA. He loved the social aspect and the friends he made as much as he enjoyed the exercise. John volunteered for many worthwhile groups and causes, but keeping Lake Merritt in Oakland beautiful and clean was one of his favorite pastimes. John loved travel, visiting 30 countries with Africa topping the list as one of his favorites. John & Shirley relocated to Burwell, NE in late 2018 to watch their grandchildren grow up. When not exercising or traveling John enjoyed fishing, playing cards, dancing, attending and assisting with basketball games and socializing, socializing. He would have loved it if everyone in the room everywhere he went, knew him. He was a loving and giving man and will be missed by all who knew him.
John is survived by his wife Shirley, son Eric, grand children Haylee and Hans Gideon, son-in-law Yohn Gideon, brothers Ron, Paul, Jerry, in-laws Luella Hudson, Dollie Smith, Myron Landenberger, and many nieces, nephews, and relatives.
Preceded in death by his parents, sister Ramona Kuhn, daughter Melanie Mayer-Gideon.
In loving memory of John and in his honor, in lieu of services, donations may be made to: Lake Merritt Institute, 568 Bellevue Avenue, Oakland, CA 94610.
Arrangementsmade by Hitchcock Funeral Home, Burwell, NE.


View the online memorial for John Joseph Mayer
To plant trees in memory, please visit our Sympathy Store.
Published by East Bay Times on Jul. 19, 2019.
MEMORIAL EVENTS
No memorial events are currently scheduled.
To offer your sympathy during this difficult time, you can now have memorial trees planted in a National Forest in memory of your loved one.
Funeral services provided by:
Hitchcock Funeral Home
MAKE A DONATION
MEMORIES & CONDOLENCES
Sponsored by East Bay Times.
1 Entry
John was a vibrant resident of the Lakeside Regency Plaza in Oakland,CA. We are saddened by his death and miss him terribly. He loved living here, loved cleaning trash out of Lake Merritt, and just helping others. He had a wonderful sense of humor and was fun to be around. Our prayers are with his family.
Carol Pingree
July 26, 2019
Showing 1 - 1 of 1 results