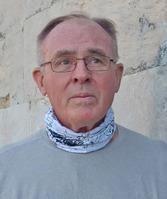 Paul gave me his genuine kind, gentle, confident mentorship. His encouragement provided me the needed nudge to jump into Rotary with both feet. His calm, collected lead by example helped me start a continuing journey with Rotary. The board meetings at your fantastic home were legend: After a full day's work, everyone rallied with his hospitality and enthusiasm to serve beyond our vocations. It was at one of those meetings that the inspiration for my email was inspired~ "rjurny". Your annual Teas also helped my wife Betsy to feel included and accepted despite our residence in Cupertino.

Last night Paul was a character in my dream: Cheerful and gregarious as ever, still teaching!

Paul's friendship was as fine as I could hope for in a lifetime. Gone too soon.

Paul's friendship~ and gentle, kind confident way of mentoring was a tremendous gift to me as he and I navigated our way through Rotary. Paul got me active and engaged, and have been ever since. He led by example and it was a privilege to follow his year as Pleasant Hill president. The board meetings at your home were highlights to my days and your Annual Teas helped my wife Betsy find belonging and acceptance despite our residence in Cupertino.

Last night 4/28/20, Paul was in a dream of mine, happy, gregarious as ever, still teaching. Truly a fine lifetime friend, gone too soon.

Rich and Betsy Randolph
Santa Rosa, CA
April 30, 2020
So sorry to hear remembered your sweet face in the courthouse in Martines love Gina.. aka Denise's family law
Gina Miller
August 9, 2018
Dear Ginger. Condolences to you and your family. I'm very sorry that Paul lost his battle with his illness. His life was so full of excellent community work. I pray for your strength. I apologize for being so late. I just found out about his passing.Mischwa
Mischwa Murphymcadams
January 22, 2018
Ginger I'm so sorry to hear about Paul. He was a great guy and I'll always remember how helpful he was to me. Loved the "flamingo" parties. Gina and I would love to visit sometime. We'll be in touch.
Mary Parenti
January 7, 2018
Showing 1 - 5 of 5 results