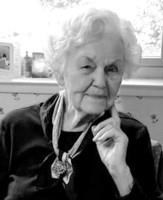 BORN
1919
DIED
2018
FUNERAL HOME
Wilson & Kratzer Chapel San Ramon
825 Hartz Way
Danville, CA
Virginia Cecelia Bee
May 10, 1919 - June 18, 2018
Resident of Danville
Born in the Polish-German neighborhood of Chicago, Ginny Bee lived a long and fulfilling life. Nee Virginia Rakowski, the youngest of 4 children, her parents, Joseph P. Rakowski and Veronica A. Stasch, enrolled her in St. Boniface School, and later Lucy Flowers School for Girls, where she also played point guard for the women's basketball team. She worked as a switchboard manager for the American Bell Telephone Company during World War II when she transferred to San Francisco.
A stewardess for United Airlines after the war, Ginny met Keith W. Bee, her future husband at The Troc Night Club on Geary St., where Keith played in the band. In 1951 they married in the Muir Woods and moved to the East Bay—first Oakland, later El Sobrante, and then Danville in 1964. Ginny and Keith directed summer entertainment for the Yosemite Park and Curry Company from 1951-68. She became a top saleswoman for Bullock's Dept. store in Walnut Creek, volunteered for 29 years at the Danville Thrift Station, as well as for the Diabetes Youth Families (DYF). Her long and happy marriage lasted 48 years.
Survived by her children Ronald John Bee (Sandra) and Terry Bee Cochran (Rick), and her grandchildren Ashley Cochran, Lindsey Thielsen, Justin Cochran, and Christopher Bee who will all remember her as a kind, compassionate, and loving mother and grandmother dedicated to her faith, her friends, and family. She lived her life on her own terms and touched many along her remarkable 99-year journey. Please make any donations in her name to the Diabetes Youth Families online at dyf.org. Ginny's Funeral Mass/Liturgy, followed by a reception, will take place on Tuesday, June 26 at 10:00AM at St. Isidore's Catholic Church, 440 La Gonda Way, Danville, CA 94526. Godspeed Ginny!

Ginny became a friend to me through her work at the Thrift Station. I often stopped in as my kids were growing up and we would visit. She would mail encouraging or interesting articles and we traded cards and hugs over the years. She loved her family, she loved to share a good story and I don't believe anyone could make you feel quite as loved as Ginny.

She was an extraordinary woman who lit up every space she entered and carried a special sparkle in those beautiful eyes.

I imagine your laugh is delighting a whole new group now sweet Ginny
October 5, 2019
My condolences are with the Bee family. Please accept my heartfelt sympathies. John 6:40
Candace
June 29, 2018
Sending all prayers to the family.