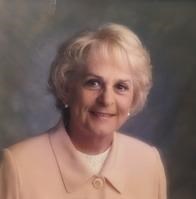 BORN
1935
DIED
2021
Wilma Joyce Botelho-Tiegs
Sept. 24, 1935 - Sept. 10, 2021
Resident of Castro Valley
Wilma Botelho Tiegs of Castro Valley passed away in her sleep on Sept 10,2021 in Danville. Wilma was born on Sept. 24,1935 in Oklahoma to Harry McComber and Barbara Nunes. The family moved to California and settled in San Lorenzo. Wilma graduated from Hayward High School and worked as a cashier at the Chabot Theater in Castro Valley. It was there that she met her husband Tony Botelho, who worked across the street at the Flying A gas station. They married and a had two children, Cindy, and Gina. Wilma throughout her career worked as a Bank Manager for Wells Fargo, and assisted Tony with the Gas Station they owned on Redwood Road and later on Foothill Blvd.
Wilma was a devoted wife and mother. Wilma had an attractive personality and would always be there if a friend was in need. In her later years she suffered from Alzheimer's and left us just weeks before her 86th birthday. She is preceded in death by her parents, Harry and Barbara. Her brothers, Frank and Glen McComber. Husbands, Tony Botelho and Ronald Tiegs. Her daughter Cindy Botelho Crues. Wilma is survived by her daughter Gina Botelho and son-in-law Jeff of Hawaii, her son-in-law Robert Crues of Castro Valley, her grandchildren Cortney Emerson Roche of Sacramento, and her grandson Kyle Anthony Brown of Tracy. Also survived by her sisters Shirley Gibson of Fremont, and Barbara Johnson, now of Rupert ID., and many nieces and nephews.
Funeral Services will be held on Monday September 27, 2021
Viewing at 11am, followed by Services @ 12pm, and family graveside burial at 1pm. Viewing and chapel services will be livestreamed for those who cannot attend.
Holy Sepulcher Funeral Center 1051 Harder Road, Hayward CA 94542 1(510)537-6600