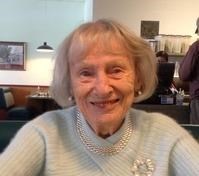 BORN
1922
DIED
2021
Yvonne R. Billo
April 30, 1922 - Nov. 7, 2021
Resident of Clayton
Yvonne passed away peacefully on Nov 7, 2021 at the age of 99 yrs old.
Yvonne was born in Iowa and was one of five children. Yvonne became engaged to her late husband Bill in 1942 while he was in the Air Force, to be married in their hometown of Detroit, MI., however Bill's leave was cancelled due to WWII events. Undeterred, Yvonne hopped on a train at the young age of 22 and headed for Hobbs NM where Bill was stationed and they married in a small church on Aug 5, 1943.
Throughout Yvonne's life they traveled the world which continued for 23 years until Bill retired from the military and they settled in Concord, CA. A homemaker and mother of five children, she was a wonderful wife, mother, grandmother, great grandmother and friend. She was kind and loving to everyone fortunate to have been a part of her life. They were parishioners of St. Bonaventure's Catholic church since 1964 and lived at Diamond Terrace since 2011.
Yvonne was preceded in death by her husband, William F. Billo, daughter Mary Christine Brown, grandchildren Riley Haeling, Brittany Armstrong and William Armstrong, and two of her siblings.
She is survived by her children, Jim Billo (Kathy), Judy Urrutia (Carlos), Charles Billo (Paula) and Bonnie Brown (Mark), as well as numerous nieces and nephews.
We would especially like to thank Flora and Paul for the amazing and loving care they gave to both Bill and Yvonne in their later years at Diamond Terrace. Flora promised Bill that she would continue taking care of "Mom" until she joined him in heaven. Flora stayed loyal and true to her promise for 8 more years, to which there are no words to express our heartfelt appreciation.
A private family Mass at St. Bonaventure's church was officiated by Father David, who acknowledged their many years of dedication to the church and to each other.
Private inurnment will be alongside her loving husband Bill at the Sacramento Valley National Cemetery in Dixon, CA at a later date.

Published by East Bay Times from Nov. 26 to Nov. 28, 2021.
To plant trees in memory, please visit the Sympathy Store.
MEMORIAL EVENTS
To offer your sympathy during this difficult time, you can now have memorial trees planted in a National Forest in memory of your loved one.
MAKE A DONATION
MEMORIES & CONDOLENCES
Sponsored by East Bay Times.
0 Entries
Be the first to post a memory or condolences.