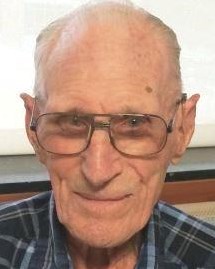 BORN
1916
DIED
2017
FUNERAL HOME
Olson Funeral and Cremation Services - Quiram Sycamore Chapel
1245 Somonauk St.
Sycamore, IL
Orville Olson, 100, of Cortland, Illinois, died Sunday, July 9, 2017, at home. He was born September 26, 1916, on the family farm in Cortland, He was the son of Otto and Edith (Nelson) Olson. He attended Cortland schools through 10th grade, and graduated from Sycamore High School in 1935, either traveling by vehicle and delivering milk before school, or on the rail spur from Cortland to Sycamore. At the same time, he farmed with his parents and grandparents, on the family farms in DeKalb County. Later, he took over the family farm operation and worked until age 70. After "retiring", he farmed from the sidelines. Growing up, he travelled through the eastern part of the U.S. with his grandparents and parents. At that time there were limited roads, and camping was more of the norm. He instilled his wanderlust to his family, and close friends, from the 1950's through the 1980's. As he travelled with his family, he would drop in on family and friends, in their homes, hospitals, and care facilities. Even though he was shy, his kindness, unconditional love and sense of humor was evident in many ways. His welcoming ways pulled in strangers and made them friends, from all walks of life and all ages. At age 80, he helped with the Cortland cemetery, build and repair the fence. He did not hesitate to help, when asked. He was very active, supporting his children through various clubs and athletic venues. He also took an interest in their friends and acquaintance's as well as their families, up to the last week of his life. He was a Cortland Township Trustee from the late 1950's through the '70s. He also was a member in the DeKalb County Farm Bureau since 1946. He was a lifelong member of Salem Lutheran Church and celebrated 82 years as a confirmed member of the church. He was also a member of the Oddfellows, from 1935-2003, as well as a founding member and past president of O.E. International. Survivors include his wife, Wilda, of 25 years, his daughter Andra, and sons, Owen (Teri), and Gail. Grandchildren, Brandon (Isabel) Todd, Jason and Erik Todd, Justin (Tiffanie) Olson Travis, Connor and Landon Olson, Katie Olson. Great grandchildren Nils Todd and Austin Olson. Stepdaughters Darlene (Wayne) Williams, Debbie (Steve) Jaskulske, stepson, Mark (Petnapa) Peterson, stepdaughters Janet (Lee) Kujak. Terrie Hallfrisch (deceased). Step grandchildren, Crystal Svoboda, Julie and Stephen Jaskulske, Vincent and Michaela Peterson, Aimee and Alex Kujak and Step great granddaughter, Sabrina Svoboda. He was preceded in death by his parents, two siblings, and Elaine, his first wife (1979). Visitation will take place at the Quiram Sycamore Funeral Chapel on 1245 Somonauk St, Sycamore Illinois on Friday July 14, 2017 from 5-8:30 p.m. With services held at Salem Lutheran Church, 1145 DeKalb Ave, Sycamore, Il on Saturday July 15, 2017 at noon. In lieu of flowers, the family requests a donation that is earmarked for a DeKalb County Farm Bureau, 1350 W Prairie Dr, Sycamore, IL 60178, for an Ag related scholarship. To share a memory or leave a condolence, visit Olsonfh.com.
Published by Courier News on Jul. 12, 2017.
To plant trees in memory, please visit our Sympathy Store.
MEMORIAL EVENTS
Jul
14
Visitation
5:00p.m. - 8:30p.m.
Quiram Sycamore Funeral Chapel
1245 Somonauk St, Sycamore, IL
Jul
15
Service
12:00p.m.
Salem Lutheran Church
1145 DeKalb Ave, Sycamore, IL
Funeral services provided by:
Olson Funeral and Cremation Services - Quiram Sycamore Chapel
MAKE A DONATION
MEMORIES & CONDOLENCES
6 Entries
Andra, Owen and Gail....very saddened to read of your Dad's passing. He was such a super man....always enjoyed his company at the many track meets back in the day!!! My sympathy to all of you....
With love,
Pat Dinges
North Port, FL
Pat Dinges
July 16, 2017
Both Bob and I grew up with Orville as constant in our lives through farming with our father's, Marvin Aldis and Don Carr. He always had a smile, was shy, and you knew he loved farming and his family. To this day we compare fields and how they look to Orville's fields. He always had the boys out there hand pulling any weeds that dared to come up in the field! Will miss him. God bless you all.
Bob and Bev Carr
July 15, 2017
Our family sends sincere sympathy for your sadness and know you are in our thoughts at this time. RIP. The Corneille family.
July 14, 2017
He was an inspiration from the time I met him. Always willing to accommodate all in any respect. Much love & happiness to the family !!
William Morgan
Family
July 12, 2017
Tancy and I wish to offer our deepest condolences. Although, we only knew Orville from Sam's; he certainly touched our lives. Such a kind wonderful person
Dannie Stanbery
July 12, 2017
So sorry for your loss. He was always so sweet and funny; always a smile on his face. What a wonderful man!