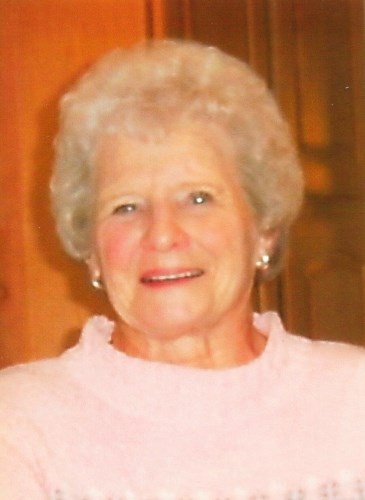 On December 15th, our loving angel, Colleen Ann (O'Carroll) Keirnes, 91, passed away peacefully at home, surrounded by her family.

Colleen was born on April 27, 1929, in Salt Lake City, the eldest of two daughters to James "Jim" Joseph and Geneva Carver O'Carroll. In 1932, she was joined by her sister, Sharon. Growing up, their father worked for the highway department and they lived in several small towns throughout northeastern Nevada. When Colleen was in the eighth grade, she moved to SLC to attend school, where she lived with her grandparents. When she was a junior in high school, she moved back to Elko, where she was happy to be back with her sister and parents, and met her lifelong friend, Ardith (Nelson) Cross. They were the two new girls in school and had only lived a few blocks from each other in SLC, but attended different schools and had never met. Colleen served on the school newspaper, The Sagebrush Saga, the Welfare Committee, and she and Sharon were officers together for the Future Homemakers of America. She was also a part of the Girls' Athletic Association and the Pep "E" squad with Ardith. After Colleen's mother passed away, her father married Estelle Cross and Ardith became her step sister-in-law.

On June 10, 1948, Colleen married Forrest R. Keirnes in Elko, and they moved to Pierce, ID. On February 15, 1949, they welcomed their first son, Forrest James, in the hospital in Orofino, ID, where Colleen was the only patient and spent a week with the hospital staff, (who according to her, totally spoiled Forrest J.), as they were snowed in, and Forrest could not get back to the hospital. When Forrest J. was less one year old, they moved back to Elko, NV, and in 1950, they moved to Salmon, ID, where they welcomed their second son, Loren Craig, on April 1, 1951. Forrest R., his brother, Dee, and their mother, Elsie, purchased a ranch on the Big Flat, where the two families lived together until early 1953. Dee and Donna's children, Lana and Gale (Pace) were more like siblings to Forrie and Craig than cousins.

Colleen worked at Lemhi Telephone Company beginning in 1954 as the night operator and retired in December 1989 as the chief operator. She told many entertaining stories about her experiences at work, the switchboard operators, the linemen and the Christmas parties.

Retirement was a happy and busy time. One of Colleen's passions was bowling, which she did for more than 65 years, regretfully quitting at the age of 89 (still using a 10 lb. ball). This allowed her to make many lifelong friends and afforded the opportunity to travel to countless bowling tournaments. She always told hilarious stories about her times with the bowling girls, even when she was no longer able to throw a ball.

Forrest R. passed away in 1997, and in 1999, Colleen married a long-time family friend, Nord Geordge, gaining two wonderful stepdaughters (she always wanted a daughter). He turned out to be the love of her life and they spent seven wonderful years dancing together before Nord passed away.

Colleen was very close to her parents, her sister and family who all remained in Elko. She visited every summer spending as much time as possible in Lamoille, where her father owned the well-known O'Carroll's Bar. With her father being from Ireland, she loved all aspects of her Irish heritage, from St. Patrick's Day with corn beef and cabbage to Irish songs and shamrocks growing on the windowsills.

In the 1970s, she began attending the county fair and horse races in Elko every Labor Day with Forrest, Nord and later her son and his family. This was also a time for reunions with family, friends and classmates. Her last year to participate was 2019. The trips to Nevada also afforded her a chance to play the penny slot machines. She rarely spent more than twenty dollars and generally came twenty or thirty dollars ahead while enjoying herself immensely, win or lose.

Colleen enjoyed traveling to visit loved ones and did this as often as possible. She hated flying, but did so four times in her life, once to Hawaii. She took a cruise to Mexico with Ardith and to Alaska with Nord. The remainder of her travels were by car. She also did not like water (even though she could swim) and always stayed where it was shallow. Once, when she took her grandchildren swimming, she would not let them get in the water past their knees until a parent joined them. When the boat capsized on a river trip, she gathered all seven life jackets and refused to release them to anyone else, even though the water was barely above her knees in the area where she was. Picnics were another pleasure, even in inclement weather.

Colleen was such a lovely, gracious lady and had numerous friends in Salmon. She was well known to many Salmon residents for her sweet demeanor. She loved having people stop by to visit. She was especially fond of her grandchildren and spent as much time with them as she could.

We all loved you so very much, Colleen, and you will always be in our hearts. This is not goodbye; we will see you again.

There will be a private family burial service at a date yet to be determined. Public memorial services are pending for later in the summer. The family would like to thank Jessica Carreno for her excellent care of Colleen when Forrest and Linda could not be present. They would also like to thank Salmon Valley Hospice (nurse, Christy, the wonderful nurses' aides and other staff) for their compassionate care of Colleen during the last few months of her life.

To plant trees in memory, please visit our Sympathy Store.
Published by Elko Daily on Dec. 23, 2020.
MEMORIAL EVENTS
No memorial events are currently scheduled.
To offer your sympathy during this difficult time, you can now have memorial trees planted in a National Forest in memory of your loved one.
GUEST BOOK
1 Entry
The world lost a gentle soul.
Judy Jones
December 23, 2020