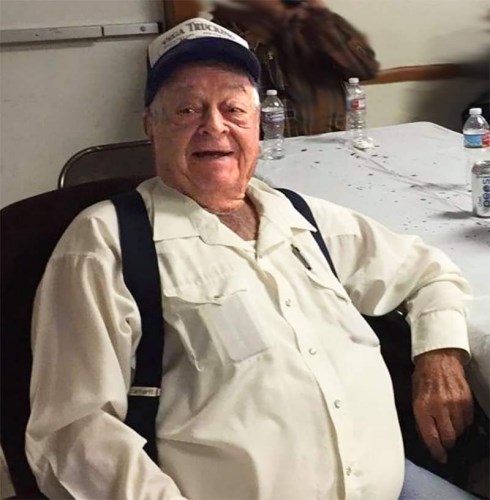 Manuel Raymond Vega Jr., age 94, a longtime resident of Elko, NV, departed this earth on September 11, 2021. Manuel was born October 25, 1926 to Manuel and Annie Vega and raised on the Vega Ranch in North Fork, and attended Island Mountain School. He was drafted into the U.S. Army at 18, during WWII and served in the Military Police until his discharge in 1947. He returned home to marry Amy L. Cook on August 2, 1949. They were married for 65 years before Amy passed on August 1, 2014. Left to remember Manuel's legacy is; his sister Diana Keogh; his three sons: Michael (Linda) Vega, Jerry (Bonnie) Vega, Enos (Lynette) Vega; his nine grandchildren: Duke Vega, Justin Vega, Philip Vega, Frankie Dixon, Dawn (Dixon) Opie, Stacie (Vega) Pacheco, Katy Vega, Zachary Vega, Landon Vega; 18 great-grandchildren, and a large extended family. Manuel and Amy started Vega Construction & Trucking in1958 and the expansion of Humboldt Vega in more recent years. Manuel also worked for the city in the water department for 38 years, retiring as Superintendent in 1992. Manuel was a patriarch to his large extended family and will be missed by many. Manuel was preceded in death by his parents; his wife, his siblings Evelyn, Guy, Aldo, Della, Jule, and Anna, as well as, his daughter, Linda (Vega) Dixon. Viewing will be held at Burn's Funeral Home from 9:00 am to noon on September 20, followed by graveside services at 1:00 pm. Celebration of life will be held directly after at the Vega Construction and Trucking shop.

Published by Elko Daily on Sep. 15, 2021.
To plant trees in memory, please visit our Sympathy Store.
MEMORIAL EVENTS
Sep
20
Viewing
9:00a.m. - 12:00p.m.
Burns Funeral Home
895 Fairgrounds Rd, Elko, NV
Sep
20
Celebration of Life
Vega Construction and Trucking shop
NV
Sep
20
Graveside service
1:00p.m.
NV
Funeral services provided by:
Burns Funeral Home
MAKE A DONATION
MEMORIES & CONDOLENCES
Sponsored by Burns Funeral Home.
12 Entries
Although I did not know Mr Vega, he had a long working relationship with my family, the Warmbrodts. They always spoke so highly of him, and of his family, and appreciated their association with him. My sorrow and condolences to the entire family
Sheila Sandusky
September 17, 2021
RIP Dude.
Tom Foertsch
September 17, 2021
Another great man leaving a large void in the family and community. My condolences to the family, RIP Manuel
Phillip Mendive
September 16, 2021
May God grant Manuel peace & joy; comfort for his family & friends. My Dad knew him & always spoke well of him (Ed Doerflinger). God bless & keep him and make His Face shine upon him. & grant him peace. Jennifer Doerflinger Hill
Jennifer Doerflinger Hill
September 16, 2021
We are sorry for your loss, we are thinking of you.
Kelly & Mike Martin
September 15, 2021
So very sorry for your loss. Manuel was an asset to our community and will be greatly missed by many.
Sandoz family
September 15, 2021
Sending prayers and our sincere condolences
Charlotte Parker-Whitby
September 15, 2021
Our deepest condolences to Dude´s family. He was one remarkable man. He helped many throughout the years. RIP Dude.
Jesse and Lisa Galindo
September 15, 2021
May Uncle dude rest in peace. He was a great man and will be missed dearly.
Dennis Ray and family
Family
September 15, 2021
Manuel was such a blessing to us and to so many in this community.The world is less without him. Heavenly reunion for him and Amy. Prayers for peace and comfort for his beloved family
Candy & Wilber
September 15, 2021
So sorry about your loss. May he rest in peace.
Robert Harris
September 15, 2021
Manuel, here is to a life well lived. May you rest in peace.
Shirley Evans
September 15, 2021
Showing 1 - 12 of 12 results