FUNERAL HOME
La Paz - Graham's Funeral Home - Las Cruces
555 West Amador
Las Cruces, NM
Barbara Funkhouser (1930 - 2014) Barbara Funkhouser, a journalism pioneer, died August 15 at the age of 84. She was the only female editor of the El Paso Times in the newspaper's 133-year history, serving from 1980 to 1986. She began her career in 1958 as a freelancer for a year, then worked for the Las Cruces Sun-News for a year before joining the staff of the El Paso Times. She also wrote the coffee-table book, "The Caregivers: El Paso's Medical History, 1898-1998." Born March 1, 1930, at Hotel Dieu Hospital in El Paso she was brought up on a farm in Fairacres that her parents purchased in 1924. Her father Kenneth Funkhouser died when she was 6, and her mother, Lucille and stepfather, Leon "Sparks" Tatreault ran the farm with help of hired labor until their deaths. Her brother, Kenneth, Jr. died in the early 1950s. She graduated from Las Cruces Union High School and from New Mexico State University in 1952 where she was a member of Zeta Tau Alpha sorority. She spent six months in Europe on a 4-H Club exchange program and then worked for five years for the 4-H organization in Washington, D. C., and Chicago, before returning to New Mexico and beginning her career as a journalist. She also participated in early discussions with Gannett Company in the development of USA Today. She retired from the El Paso Times on June 1, 1990 but continued to work in her journalism field, teaching courses at New Mexico State University and writing editorials for the Las Cruces Sun-News. She remained active in the community and was a founding board member of the New Mexico Farm and Ranch Museum. She continued running Tatreault Vineyard on her family farm until her death. She is survived by three cousins, Phyllis Denton, Gordon Denton, and Claire Shervanick, all of Las Cruces. A memorial service is scheduled for 10 a.m. Tuesday, August 26, 2014 at St. James' Episcopal Church, 102 St. James Ave., Las Cruces, N.M. In lieu of flowers the family requests memorial contributions to made to Community Foundation of Southern New Mexico, 301 South Church St., Suite H, Las Cruces, NM 88001. Services provided by La Paz-Grahams Funeral Home
Published by El Paso Times from Aug. 19 to Aug. 27, 2014.
To plant trees in memory, please visit the Sympathy Store.
MEMORIAL EVENTS
To offer your sympathy during this difficult time, you can now have memorial trees planted in a National Forest in memory of your loved one.
Funeral services provided by:
La Paz - Graham's Funeral Home - Las Cruces
MAKE A DONATION
MEMORIES & CONDOLENCES
14 Entries
She was my deskmate at the Times for three years. I learned much from her and miss her greatly. I remember her being totally intimidating me for the first month or so as I was young and this was my first job as a reporter for a daily newspaper. But gradually I discovered what a great and giving person she was. Can remember having many conversations with her about newspapers, reporting, eggs, her mother, waxing ice trays and so much more. After I moved to New York to edit a travel magazine I was able to return once while she was editor amd stopped in to say hi. I am glad I had the chance to see her and congratulate her for making editor. I am proud to be able to call her friend.
David Dyer
Coworker
November 21, 2019
I will miss Barbara and her cute sense of humor with the gruff exterior . We collaborated on stories about the plays at the Community Theater in El Paso and shared gardening secrets when I moved to Las Cruces. There was nobody like her in this area.Carole Grady
Carole Grady
September 19, 2014
Barbara, Barbara, Barbara. You have left us too soon and I will miss you. I was a new neighbor off Fairacres Road in 1989, and was immediately drawn to Barbara's rose adobe, shaded by tall trees, ringed with flowering bushes, often beckoned by handmade signs announcing ‘grapes' or other fruit in season. I met Barbara, and knowing nothing about her past, found her fascinating, feisty and compassionate (how many kitties are you feeding today?) Under the pressure of huge development proposals for the west mesa escarpment and adjacent farmland, our neighborhood formed the Westside Neighbor Coalition to participate in the governmental processes of zoning, subdivision and master planning, roads, utilities and water rights. Barbara and Dr. Richard Johnson were leaders, the ‘elders', so to speak, with the history and geography of the area in their blood, and all of us would spend countless hours in Barbara's home poring over plans seeking to understand and be the voice of responsible conservation and development. We hired engineers, wrote letters, and attended city and county meetings to share our knowledge and our concerns. Barbara and I became fast friends and when the dust settled, continued to visit each other to catch up and trade information about our neck of the woods and the city and county. A great lady.
Sandy Geiger
August 26, 2014 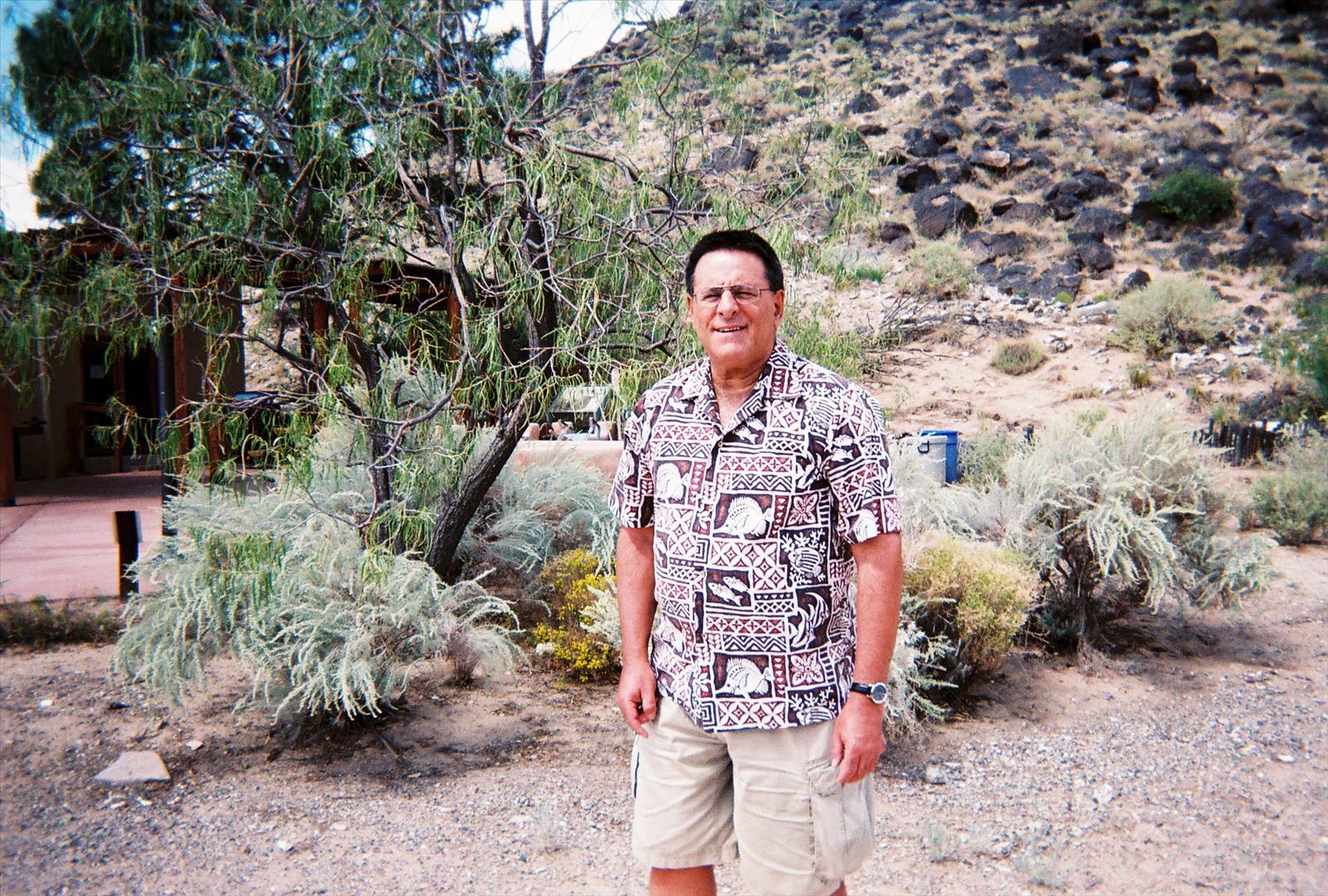 There will never be enough space here or elsewhere to describe the deepest heartfelt memories for me and family of my 'Old Maid Aunt', as I always affectionately called her, even though we weren't kin. Our long association & enduring friendship began in '72, & over many of the years that ensued for the decade-plus that followed, I worked directly under Barbara at the EP Times, first as Asst. Entertainment Ed., then later as Asst. Edit. Ed. & ultimately, when she achieved the pinnacle of 1st woman Ed. of the paper, I became Edit. Pg. Ed. When I saw a TV show about a Mesilla hotel several weeks ago, I vowed to call Barbara right then, but never did, & now regret I didn't. To say she will be sorely missed would be the understatement of the century. This tough yet compassionate lady meant more to me & countless others than one can imagine, both personally and professionally. God Speed, Barbara! You are in a much better place now!
Phil Ross
August 24, 2014
Barbara was not only my friend and mentor, but my mother's friend and partner when both were in their early days of journalism at the El Paso Times. Many fond memories of this tough newspaperwoman who blazed trails for all of us.
Laurie Paternoster
August 22, 2014
A Grand Lady That Is Missed Already...Our Thoughts And Prayers Are With Her Family During This Difficult Time...Barbara and LK Terrell
LK Terrell
August 19, 2014
I owe my 40-year career in journalism to Barbara, who helped me get my first job in the World of Women at the El Paso Times. And I'm so glad she remained my friend for all those years. I last saw her in May and she told me, "You know, you're the only one still around I can talk journalism with." Bless you, Barbara.
Rene Kimball
August 19, 2014
Buck Lanier
August 18, 2014
Barbara was one of a kind. I remember her fondly.
Edward Kimble
August 18, 2014
It was sad to read of Barbara's departure. She was a good friend, a consummate professional, and she brought great insight to the journalism courses she taught at NMSU. I will miss her and many others will miss her journalistic work, even if they are unaware of what they are missing. Barbara, may your excellent journey continue.
Frank Thayer
August 18, 2014
she was a long time customer of Coleman pharmacies and discussed current events. She had the best interest of El Paso and El Pasoans at heart, and was a smart,keen observer of our strengths and weakness as a community.
BARRY COLEMAN
August 18, 2014
Journalism is a better place for having known her; a lesser place without her
Mary Benanti
August 18, 2014
I knew Barbara as a kind person thru a mutual friend Dorothy Corona. Barbara was a very intelligent person who brought many people together for the good works of the cities of El Paso and Las Cruces. She now with family and dear friends.
Bill Farnsworth
August 17, 2014
The passing of my friend and colleague Barbara Funkhouser leaves me sad, wishing I'd have seen her more often, listened to her stories one more time, picked her up for lunch again, or told me how much she meant to me. She was a classy lady.
Judy McMillie
August 17, 2014
Showing 1 - 14 of 14 results