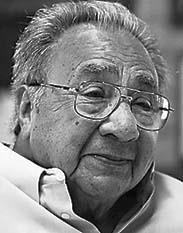 Semper Fi Sir!
Mike Casey
September 19, 2017
Ken Sutherland
September 9, 2017
Annette, my condolences may God give comfort to you and your family. May he rest in peace.
Petra Ronquillo
September 8, 2017
Annette, your family and all Moreno's,
Our Senor, gave him a long life to continue the powerful influence he had in this world. His legacy will continue going forward and have an impact on future generations.
Adelante !
Ken Sutherland
September 8, 2017
Annette, sorry for your lost, my condolences to you and all your family.
Isabel Telles
September 7, 2017
Fernando Chacon
September 7, 2017
Paul, you were a great inspiration to your many friends. As the patriarch of the Moreno family, you always placed them first among earthly considerations, but your faith in Jesus was paramount and demonstrated in your life of serving others. No one will be able to replace all the good you did for los de abajo and the millions that you touched by being the conscience of the House for decades. I was blessed to know you and to have had the privilege of being your friend. See you and the other side!
Joe Kennard
September 7, 2017
My condolences to Mr. Moreno's daughter Annette and her daughter's. Your dad was a great person. May he Rest in Peace.
VERONICA MORENO
September 7, 2017
My good friend, my you RIP. Thank you, for all the good work and time you give to all of us. Paul,you were always their for me, as a member of Texas SBOE. Rene Nunez
September 6, 2017
The song "I did it my way" is definitely true to what he accomplished. He believed in helping those poor and oppressed regardless of the race, color, religion, ethnicity, sex, or political affiliation.
Greatness is not purchased it is achieved with hard work and determination which is what Paul did. He was a loving father, grandfather and great grandfather. I was extremely fortunate to know him as an attorney and legislator. My best memories of him are as my father-in-law. Paul you will be missed by many. Con mucho carino,
Fernie Alvarado
September 6, 2017
ON BEHALF OF THE MEMORY OF MY PARENTS, MR. & MRS. ARNULFO ALVARADO OF WHOM ALWAYS HAD A RESPECTABLE FRIENDSHIP, FROM THE NEIGHBORHOOD ON ARIZONA AVE. TO MR.MORENOS FAMILY AND FRIENDS MAY YOUR FAITH CARRY YOU THROUGH THIS DIFFICULT TIME .
I SAW AND SPOKE WITH HIM NOT LONG AGO AT ST.PIUS CHURCH, HE LOOKED WELL, BUT ONLY OUR LORD KNOWS WHEN HE NEEDS US.
Sandra Alvarado
September 6, 2017
Dear Paul, miss you, bato. Along with Paul's brother, Savage, i spent the legislative session of 1965 with Paul in Austin and later, in Long Beach for his physical at the VA, and to attend his brother, Louie's wedding. He was instrumental in helping form my identity as a Chicano and in my work in the street politics of the late sixties and seventies. His quick wit and unending cabula made us all think quick on our feet. He came to me one day in 1970 and had me print some t-shirts for his foray into the medudo cook off at McKellican Canyon. Those words were portentous and will forever be remembered; "Menudo...Breakfast of Champions." Thank you, Paul. As we ascribed back in the 60's, you are a red-blooded All American boy, of Mexican descent, from El Paso, Texas. RIP. Chinchilla Charlie
carlos barcena
September 6, 2017
Dear Paul, You were an example to us all. Paul's wit and unending "cabula" honed our responses not just to his ribbing, but taught us to think on our feet, and importance of standing up for our beliefs. Along with my best friend and his brother Savage, we spent the legislative session of 1964 in Austin, and later with him on his regular physicals at the VA center in Long Beach. Paul was an example to me and his dedication prompted me to fight the good fight as a Chicano during the late sixties and early seventies. Paul never changed and approached life with dominion; " Listen to me whether you like it or not," his mantra. At the end of the 1960's, Paul summoned me and asked me to print some t-shirts for him. The image is one that many of us remember to this day, and one that became a rallying cry to all of us in El Paso. Those t-shirts bore his inspired words, "Menudo, Breakfast of Champions." You were our champion, Paul, still are.
Tu camarada, "Chinchilla Charles Degaulstone"
Carlos Barcena
September 6, 2017
So sad. Great loss to our community. Will always remember you Paul, great times with you and Joe Casazes. Your spirit and wonderful personality will stay with me forever... RIP, Jeannie
Jeannie Conklin
September 6, 2017
Rest in Peace, Paul. You will be remembered as a good neighbor and friend. I will miss visiting with you on my visits to El Paso.
Valla con Dios
Estela Tellez Ambrose
September 6, 2017
May he rest in peace. May God give comfort to all his family and friends.
I met Mr. Moreno when I was a member of Tejano Democrats, I was working at EPCC and also I was a member of AFSCME Local 59.
He was always very nice and polite to me. He had a very generous and giving heart.
His work and courage impacted many lives in a very positive way.
His legacy will live on.
(Previously Maria M. Evans)
Maria M. Flores
September 5, 2017
Paul was my parents compadre. Antonio and magdalena martinez..my brothers padrino. Rest in peace paul...beatrice martinez hernandez
Beatrice Hernandez
September 5, 2017
Rest in Peace Uncle Paul, you deserve it for all the hard work you did.
Ceci Moreno Esquivel
September 5, 2017
Showing 1 - 19 of 19 results