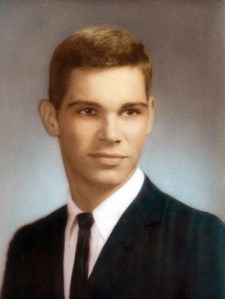 Charlie was a graduate of Dothan High School, attended the University of South Alabama and graduated from Troy University in Troy with a B.S. in History. Charlie was retired from the residential home construction industry and was the previous owner of Roberts Home Planning in Dothan, Alabama. He designed and drafted plans for many of the beautiful homes in Dothan, Enterprise and other surrounding towns with his designs featured in the Dothan Parade of Homes and Southern Living magazine.

Charlie had a great passion for history, especially military history, and enjoyed antiques. Charlie was also a very talented musician and was a member of the regionally successful Mar-Teks band in the 1960's which, among many other shows, opened for Roy Orbison at the Dothan Farm Center. Most lovingly, he tirelessly was the primary caregiver for both his aging parents near the end of their lives until their deaths.

Charlie was truly a unique person who was talented and well versed in many different and diverse areas. Anything Charlie enjoyed he did "all out" and with a passion. A discussion with Charlie could include his thoughts on German steins and pipes, revolutionary war swords, classical music, country music, and Rembrandt paintings just to name a few topics he was always ready and willing to talk about. Charlie greatly loved his family and they him. His family along with his many friends will miss him deeply.

Arrangements will be handled by Ward Wilson Funeral Home according to Charlie's wishes.

Published by Enterprise Ledger from Jun. 18 to Jun. 23, 2021.
To plant trees in memory, please visit our Sympathy Store.
MEMORIAL EVENTS
To offer your sympathy during this difficult time, you can now have memorial trees planted in a National Forest in memory of your loved one.
Funeral services provided by:
Ward-Wilson Funeral Home - Dothan
MAKE A DONATION
MEMORIES & CONDOLENCES
Sponsored by Ward-Wilson Funeral Home - Dothan.
1 Entry
Charlie was one of my favorite people at DHS, class of 1967. My heart and prayers go out to the family at this time and I know he will be missed by many.
Zona Gayle Daniell
Friend
June 21, 2021
Showing 1 - 1 of 1 results