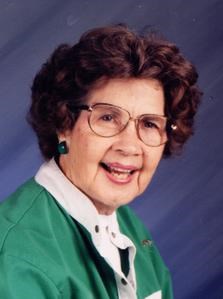 1927…..the year Lindbergh crossed the Atlantic Ocean non-stop by plane, the year Babe Ruth hit 60 home runs in a season, the year the first "talking" motion picture was made, and the year Seroba Bowdoin Marsh was born…it was a very good year.

Seroba, the third of three children, was born to Maggie Udora Covington Bowdoin, and James Oscar Bowdoin on January 31st, 1927 in Samson, Alabama. After graduating from Coffee Springs High School, she attended Auburn University (then Alabama Polytechnic Institute), majoring in Vocational Home Economics. Following graduation in 1948, she married her high school sweetheart, Barney Woodrow Marsh, and moved to Enterprise where she taught 1st grade at College Street Elementary School for the next 7 years. Through this job, she discovered her true calling: working with children. In 1955, Seroba left College Street to open her own private kindergarten, The Gingerbread Kindergarten. Over the next 52 years, Seroba taught more than a thousand children, each precious to her, from Enterprise and the surrounding area.

In addition to her career as a teacher, Seroba was actively involved in her community and church, and was devoted to her family. Seroba was a long standing member of the Quest Study Club, "The Sorority" social club, and Delta Kappa Gamma honor society for teachers. She was named Enterprise Woman of the year in 1964 and as a result, became a member of the Enterprise Oscar Club. Seroba was an active Member of First Baptist Church in Enterprise where she served as a children's Sunday school teacher and Nursery Coordinator for many years. With her husband Barney, Seroba was involved in the recruitment and formation of Enterprise State Junior College, and was a founding member of Enterprise Country Club.

Seroba was preceded in death by her husband, Barney Woodrow Marsh, and her brothers, Wilmoth Bowman Bowdoin of Murfreesboro, Tennessee and Samuel Thelma Bowdoin of Samson, Alabama.

A graveside service will be held for Seroba at 2:00 on Friday, October 30th, at Meadowlawn Cemetery, 6128 Geneva Highway, Enterprise, Alabama. Masks requested.

To plant trees in memory, please visit our Sympathy Store.
Published by Enterprise Ledger on Oct. 28, 2020.
MEMORIAL EVENTS
Oct
30
Graveside service
2:00p.m.
Meadowlawn Cemetery
6128 Geneva Highway, Enterprise, Alabama
Funeral services provided by:
Searcy Funeral Home and Crematory - Enterprise
GUEST BOOK
1 Entry
I'm sorry sorry to hear about Mrs Marsh. I can remember how sweet and loving she was both my girls went to school with her. She taught them so much. They both loved her so much. They also loved Me Barney.They always got help him pick up stuff in the yard.
Jan Lolley
October 28, 2020