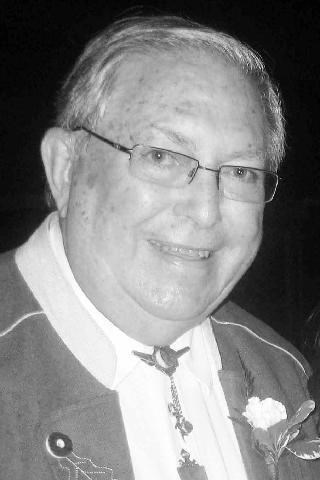 Paul attended Crystal Valley and St. Joseph Elementary, Fairview High School, University of Maryland and The United States Armed Forces Institute, Europe. He was a lifelong Erie resident with the exception of the years he was assigned to the U.S. Army 559th Ballistic Missile Battalion in Mainz, Germany as a Nuclear Armament Specialist and at White Sands Nuclear Test Site.

Paul is survived by his bride of 59 years, Nancy Ann (Loper), a son Mark and his wife Dale of San Antonio, Texas, and a daughter Carla and her husband Douglas Allen of Syracuse, N.Y. He is further survived by his grandchildren Katie Fischer Masolotte (Ryan), Joseph P. Fischer and Allison Fischer. Also surviving are great-granddaughters Tessa and Aurora Masolotte, plus many nieces and nephews.

Paul was preceded in death by his parents and sisters, Janet Godfrey and Jacquelyn (Lyn) Wallin.

Paul built his career and legacy in the pipe organ industry. Starting as an apprentice at Tellers Organ Company, he went on to acquire his Master Pipe Organ Builder certification and then joined the firm of Lawrence Phelps and Associates. In 1976, Paul founded his own firm specializing in the historic restoration of pipe organs in the US and foreign countries. The magnum opus in his career came when he--along with his son Mark--was selected to restore the world's largest outdoor pipe organ, the Massey Memorial Organ at Chautauqua Institution. His other noteworthy projects include the historic restoration of Tellers Organ Opus #1, originally built in Erie in 1906 for the Iglesia de la Epiphania, Santo Domingo, and a new organ for the 1,300-year old Hexham Abbey in Northumberland, England. Paul is the author of Making Music: The History of the Organ and Piano Industries in Erie, Pa.

Over the years, the Fischer home has been a stopping point for countless people. They hosted 16 exchange students and provided respite to many in need whether because of addiction, divorce, isolation or even the weary traveler who just needed a place to stay. Their doors were always open to provide shelter, comfort and compassion.

Paul and Nancy travelled the world in later life, both on their own and by organizing group trips. From the highest peak in the Swiss Alps to two miles underground in a salt mine in Austria to coming face to face with the mummy of Ramses in the Valley of the Kings in Egypt, Paul sought out every opportunity to explore history, culture and geography. He became a go-to resource and ad hoc travel agent for anyone who wanted a personalized, "live like the locals" itinerary for some of his favorite places throughout Europe. It's been said that Paul is the only person who can drive from the northern most point in Europe to the southern tip of Italy and never get on a paved road while staying at everything from farm houses to castles along the way.

Paul had a special interest in WWII history and the Holocaust. Through his travels and research, he amassed a wealth of knowledge and stories that he shared in presentations with local college and high school students.

Paul served St. Peter's Cathedral as a choir member, lector, Eucharistic Minister and Parish Council member. He also served as President of the Mercyhurst Prep parent board of directors and was a founding parent of the MPS Rowing Team. He was Regional Committeeman for Boy Scouts of America, a member and president of the German Cultural Society of Erie, and a member of Presque Isle Rotary and Erie Maennerchor Clubs.

Friends may call at the Brugger Funeral Homes & Crematory, 1595 West 38th Street on Wednesday, February 10, 2021 from 10:00 a.m. until the time of the funeral service at 1:00 p.m. with Dr. Michael DeSanctis officiating. COVID-19 guidelines on masks and social distancing will be in place. Family and friends can join a virtual live stream funeral service at bruggerfuneralhomes.com on the tribute tab of Paul's obituary. Private burial will be in Laurel Hill Cemetery at a later date.

Paul's request is that no one grieves for him.

In lieu of flowers, please send donations to the Paul Fischer Memorial Scholarship Fund at Syracuse University which is established to provide monies to students studying pipe organ. givetosu.syr.edu/paulfischer

"My bountiful wealth is not monetary but in the loving family, relatives and friends with which I have been blessed. I have literally been to the mountaintop. This leaves me at peace with myself, my Creator and each of you".

Condolences may be sent at www.bruggerfuneralhomes.com.


Published by Erie Times-News on Feb. 7, 2021.
To plant trees in memory, please visit the Sympathy Store.
MEMORIAL EVENTS
Feb
10
Calling hours
10:00a.m. - 1:00p.m.
Brugger Funeral Homes & Crematory - West 38th St.
1595 West 38TH St., Erie, PA
Feb
10
Funeral service
1:00p.m.
Brugger Funeral Homes & Crematory - West 38th St.
1595 West 38TH St., Erie, PA
Funeral services provided by:
Brugger Funeral Homes & Crematory - West 38th St.
MAKE A DONATION
MEMORIES & CONDOLENCES
Sponsored by Brugger Funeral Homes & Crematory - West 38th St..
5 Entries
Dearest Nancy, Carla, and Mark. My son Kyle just told us about Paul’s passing. Dave and I send our sincerest condolences. He was such a good man. We have many memories of you both in your home.
Dave and Vicki Fiolek
Friend
March 13, 2021
My sympathies on the loss of Paul. My ancestors were also involved in the organ industry in Erie. Please email me if a copy of his book "Making Music" is available. naturelover120ATmsn.com
David Lutsch
February 26, 2021
My Deepest sympathies to the family. He was a great guy. I learned alot working with him and even trout fishing etc. I never forget him pulling me out of the field. Ronald Beer. Aka Muffie
Ronald J Beer
Friend
February 9, 2021
My deepest sympathy to Nancy and family. I was in St. Peter's Cathedral choir with Paul for many years. Also I was on a Renew team with Paul and Nancy at the Cathedral. So many beautiful memories for two loving friends. Although I have not seen you in many years you have always been deep in my heart. My prayers and love are with you in the loss of Paul. May the Heart of Jesus bring you great comfort.
Kathie Gausman Hannibal
Kathleen Gausman Hannibal
Friend
February 7, 2021
Paul was the best grandfather my children could have ever asked for. He has left them with unimaginable memories. Have a German beer waiting for us when the time comes. Rest in peace.
Donna Cornelius
February 7, 2021
Showing 1 - 5 of 5 results