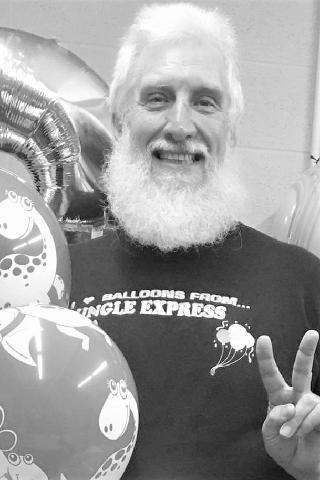 He was a 1968 graduate of East High School and earned his degree in Health, Phys Ed and Recreation at Slippery Rock State College in 1973.

Billy had a vast array of stepping stones before opening Jungle Express in 1979. Some will remember him as a Presque Isle Lifeguard, a Gerente-geral at WMDI-FM, a phys ed teacher, a wrestling coach, a driver's ed teacher in Millcreek Township Schools, and he was also known as DJ Dollar Bill at WJET-FM/ JET Broadcasting, Inc.

As Bull Mangani (Head Gorilla) at Jungle Express, Bill delivered balloons in a gorilla costume on a moped. The business quickly evolved from birthday grams into decorating proms, weddings etc. He especially enjoyed visits to multiple generations of families as Santa Claus, with his wife Charlene as Mrs. Claus.

Bill not only spent his time decorating Erie, but made as many people as he could laugh and smile (most definitely a legacy that few can truly claim). He knew everyone and everyone respected him.

Billy pursued many interests including playing billiards. He was the 2005 City Street Pool Champion. Bill was a disc golf enthusiast. Bill and Char lovingly raised Jack Russell dogs. He especially loved being a grandpa.

In addition to his parents, he was preceded in death by his sister, Judith Kelly of Minnesota.

Memorials may be made to the family in care of the funeral home.

Send condolences and share photos with the family at www.BurtonQuinnScott.com.