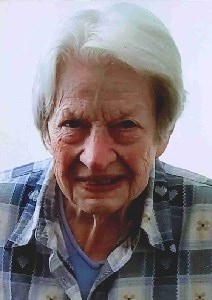 BORN
1929
DIED
2021
FUNERAL HOME
James J. Palmeri Funeral Home
6602 ALPHA AVE
Martins Creek, PA
BANGOR Rita B. Swope, 91, of Bangor, PA passed away Monday, October 11th, at Saucon Valley Manor, Hellertown, PA. Rita was born in Easton, PA on October 26, 1929, a daughter of the late George and Elizabeth (DePue) Butz. She was the widow of H W. Swope who passed away in 1999. Rita was a graduate of Rider University. She was employed as the bookkeeper for the Martins Creek Pioneer Store for over 50 years until retiring in 2010. Prior to that Rita was the secretary to the Dean at Rider University in Trenton, NJ. Rita was instrumental in establishing the Hunter-Martin Settlement Museum in Lower Mt. Bethel Twp. She was the former President of the Bangor Junior Woman's Club, served as a member of the Church Hill Cemetery Association and the former PPL Citizens Advisory Committee. She was also a proud colon cancer survivor. Rita was a member of Good Shepherd Lutheran Church in Martins Creek, PA. She is survived by a son John Swope, husband of Donna, daughter-in-law Danielle Swope, 2 grandsons, Eric Swope, husband of Megan, and Jeff Swope, husband of Kari. 4 great-grandchildren Gavin, Justin, and Xander Swope, and Noah Post, and numerous nieces and nephews. She was preceded in death by a son Jeff Swope, and 3 brothers, Frank, Lester, and George Butz. Services will be held privately at the convenience of the family. Arrangements have been entrusted to the James J. Palmeri Funeral Home, Martins Creek, PA. Online condolences may be offered at palmerifuneralhome.com. In lieu of flowers, memorial contributions may be made to Hunter-Martin Museum Post Office Martins Creek, PA 18063 or Good Shepherd Lutheran Church, PO Box 128R, Martins Creek, PA 18063. James J. Palmeri Funeral Home 6602 Alpha Ave Martins Creek, PA 18063 (610) 258-1762
Published by The Express Times from Oct. 12 to Oct. 13, 2021.
MEMORIAL EVENTS
To offer your sympathy during this difficult time, you can now have memorial trees planted in a National Forest in memory of your loved one.
Funeral services provided by:
James J. Palmeri Funeral Home
MAKE A DONATION
MEMORIES & CONDOLENCES
Sponsored by The Family.
9 Entries
Rita told me she enjoyed watching my kids play in our yard from her work desk window at the Pioneer Store. I have missed the "Hi" "what's new today?" she would greet me with. Our Condolences to John and Family.
Kevin and Judy Duane
Friend
October 15, 2021
Please accept my condolences on Rita's Passing. I was one of her Nurses at Saucon Valley Manor, and the more I got to know Rita, the more I looked forward to seeing her. She always had a smile for me, and a quip or two that made ME smile. She will be missed.
Paul Kuzma LPN
Work
October 15, 2021
I never had the pleasure of meeting Rita, but I do appreciate all she did for the community. My sincere sympathies.
Sharon
October 14, 2021
John & family Extending heartfelt sympathy with the loss of your mother, Sincerely,
Judi Brugler
October 13, 2021
Our sincere sympathy thoughts and prayers to John, Donna, Danielle and the entire Swope immediate and extended families. Rita was a pillar of the Lower Mt. Bethel Community. Her enthusiasm and vibrant personality and love of our history were well known and will be sorely missed. May she rest in eternal peace.
Gina and Rich Grucela
Friend
October 13, 2021
As the days and weeks pass, and as you return to life's routine, may you continue to feel comforted by the love and support of family and friends.
Cindy Kriel
October 13, 2021
So sorry to see this, may she rest in peace. Condolences to the family. We have fond memories of Rita.
Bill and Denise Kittle
October 13, 2021
My deepest sympathy to the entire Swope family
Gregory Michael Defrancisco
Friend
October 13, 2021
John and family Sorry to read of your mothers passing. Our thoughts and prayer are with you.
Jim and Connie Crane
Friend
October 12, 2021
Showing 1 - 9 of 9 results