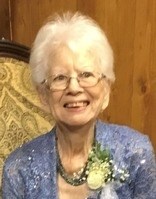 FUNERAL HOME
Cumby Family Funeral Service
1015 Eastchester Drive
High Point, NC
Mary Kingdon
Mary Oneida Grace (Sell) Kingdon went to be with her Lord on Sunday, August 1, 2021 at her home in High Point, North Carolina with her immediate family by her side. She was 87. Born in Canton, Ohio to Virgil Ezra and Mabel Donnie (Rowe) Sell, she graduated from McKinley High School in Canton, earned her Bachelor degree at Houghton College, Houghton, New York, and Master of Science in Education, specializing in Reading, from Alfred University, Alfred, New York. She taught school for thirty-five years. Thirty of those years were at Friendship Central School in Friendship, New York teaching Reading for grades four, five and six. She served a number of terms as president of the Friendship Central School Teachers Union. She also represented a cluster of western New York public schools for several years at the annual meetings of the New York State Teachers Retirement System in Albany, New York.
She is survived by her husband of sixty-four years, Harold Ivor Edwin Kingdon Sr. They resided in Houghton, New York for fifty years prior to moving to North Carolina to be near family. She is also survived by their daughter Sheryl Lynn Kingdon Johnson of Chattanooga, Tennessee; sons Harold Ivor Edwin Kingdon, Jr. (Debbie) and James Todd Ezra Kingdon (Paula) of High Point, North Carolina; twelve grandchildren, three great grandsons, and many nieces and nephews and great nieces and nephews. She was predeceased by her parents, Virgil and Mabel (Rowe) Sell; sister, Ruth (Sell) Hague; brothers Paul Sell (Mary) and Robert Sell (Wilma); daughter Jill Renée Kingdon Tyson (John); infant grandson, Kel Jonathan Kingdon, and son-in-law, Spencer Allen Johnson.
Her Christian faith was her rock and foundation and she instilled that faith in her children. She was a devoted wife and companion, gracious and humble, with the gift of hospitality. She enjoyed cross-stitching baby blankets for grandchildren and she and her husband traveled extensively in the U.S. and Canada in their Airstream travel trailer. She was deeply loved by her family and will be greatly missed by all who knew her.
To honor her passions as an educator and a follower of Christ, memorials may be given to a Christian school or a church of the donor's choice.
A Celebration of her life will be held at the Cumby Family Funeral Service, 1015 Eastchester Drive in High Point, North Carolina at 10:00 AM on Wednesday, August 11, with the Rev. Dr. Harold Kingdon officiating.
Published by Hornell Evening Tribune from Aug. 7 to Aug. 8, 2021.
To plant trees in memory, please visit the Sympathy Store.
MEMORIAL EVENTS
Aug
11
Celebration of Life
10:00a.m.
Cumby Family Funeral Service
1015 Eastchester Drive, High Point, NC
Funeral services provided by:
Cumby Family Funeral Service
MAKE A DONATION
MEMORIES & CONDOLENCES
Sponsored by Cumby Family Funeral Service.
6 Entries
had you in her in 5th and 6th grade in the early 70tys taught me the love of reading and science thank you so very much mrs.Kingdon.
bruce miles
August 16, 2021
It was such a privilege to begin my teaching career in 1973 with Mary as a colleague. Her Christian beliefs were evident in the way she treated students and parents with kindness. She was highly competent in instilling a love for reading in her students, allowing the to spend the first ten minutes of class time reading a book they had brought to class silently. For years I looked forward to receiving a Christmas card from her to learn about her family and her marvelous trips with Harold. She was strong in so many ways. Condolences to her family...she is safe with the Lord.
Michael Kunz
School
August 12, 2021
Mary Kingdon has been our friend for 52 years. She was always the most honest compassionate Christian friend we've ever had! We shared happiness, sorrow, deaths and births. We never saw her when she wasn't happy to see you , she was a true blessing to all who knew her. Mary, God willing we shall see you later in a perfect world. Love you, Bev and Dale Spencer
Bev and Dale Spencer
August 9, 2021
Condolences to the family. I will forever remember having Mrs. Kingdon for 4-6 reading and being in her 6th grade homeroom at FCS!
Christine (Plaisted) Kessler
School
August 7, 2021
My sincere condolences to the families of Mrs. Kingdon. She was a special lady in our childhood memories as our sixth grade teacher at Friendship Central School. May you Rest In Peace! You will never be forgotten!!
Sally Stuck Gildner- Coder
August 7, 2021
My condolences to the family. Mrs Kingdon was my teacher at FCS in the late 70's. She passed on her love of books to many. I have fond memories of her reading books to us after our class work was done. Her reading of the Lion and the Wardrobe still remains in my memory 45 years later. She was a special teacher.
Jodi (Butler) Prince
School
August 7, 2021
Showing 1 - 6 of 6 results