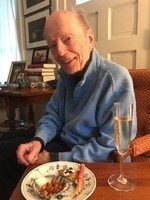 BORN
1930
DIED
2021
Roger Morton Smith
Alfred - Roger Morton Smith, 91, of 30 South Main Street, Alfred, passed away peacefully, in the embrace of his wife and under the compassionate care of the nurses at the U. of R. Jones Memorial Hospital, Wellsville, in the first hour of July 5, 2021, after a long and courageous battle with Lewy Body Dementia.
Roger was born on March 28, 1930, in Auburndale, Newton, Massachusetts, the only child of Archer and Alice Bagehot Smith. His mother passed away when he was a child and he was sent to boarding school; upon reaching 7th grade, his father enrolled him in the Boston Latin School (founded in 1635 and the oldest public school in the United States).
After high school, and barely 17, Roger enlisted in the United States Coast Guard where his writing talents were discovered and he was sent to the U. S. Navy Training Station, Chicago, to study journalism. He then was assigned to the USCG Public Relations office in New York City, where his "boss" was Alex Haley, at that time Chief Journalist, USCG—almost three decades before the publication of "Roots".
Roger earned his B.A. and M.A. degrees at the University of Hawaii where he was elected to Phi Beta Kappa. Doctoral studies followed at Cornell University. After completion of his coursework, he spent 1960-1962 in Southeast Asia on a Ford Foundation Foreign Area Training Program Fellowship to research his dissertation. He received his Ph.D. degree from Cornell in 1964 and his dissertation was published by Cornell University Press in 1965, by which time Roger was teaching at the University of Washington. "Cambodia's Foreign Policy" was in demand as a university textbook for more than a decade after its publication.
Roger also taught at the University of Michigan before accepting an invitation from the Ford Foundation to be their Program Officer for Southeast Asia, based in Bangkok, after which he taught at Cornell and subsequently assumed the position of Associate Dean of Liberal Studies at SUNY Potsdam. In early 1975, he met the love of his life, Sharon Bouck; they were married in Christ Episcopal Church, Bronxville, NY, on March 21, 1976. In 1981, eager to live in Europe for a while, they embarked upon a new life of teaching outside conventional academia, in Milan, Italy.
In mid-summer 1987, Roger and Sharon returned to the U.S.A and settled in Alfred to be close to her parents, the late Warren and Dorothy Bouck. Roger served a stint as Director of Public Relations at Alfred University, where Sharon taught Italian, during which time they got to work on realizing a dream that had begun to form while they were still living in Italy: to create unusual cultural travel experiences that they would plan and lead; thus, came into being Travel Designs Associates Inc.
Their first tour was in Italy in the spring of 1989; over 70 specially designed small group tours followed, from the Alps to Sicily. In addition, dozens of requests followed from "repeat" clients to travel to other European countries, especially Austria, the Czech Republic, France, and Turkey. Roger's deep knowledge of Southeast Asia enabled them to create and lead trips in Cambodia, Laos, Thailand and Viet Nam, from early 2001 until the financial crisis of 2008.
Roger was diagnosed with Lewy Body Dementia in March 2015, yet still traveled eagerly to Italy each of the next four years. He was an avid reader of history and biography, but also took time to help Sharon create a landscape garden at their home in Alfred, which, in the summer of 2020, served as a veritable sanctuary as they "sheltered in place".
Roger is survived by his wife, Sharon Bouck Smith; his brother- and sister-in-law, W. Lynn and Jill Bouck, niece, Elizabeth Bouck, and nephew, David Bouck, all residents of the Island of Martha's Vineyard; a virtual family in Milano; and dear friends in Alfred-and from Maine to Florida and North Carolina to Arizona, with whom Roger shared his grace and knowledge on many foreign and domestic tours for nearly three decades.
A memorial service will be held in Roger's honor at the Union University Church in Alfred on August 21, at 2:00 pm. Sharon would like to thank Brown & Powers Funeral Home for its assistance during this painful time; a more detailed account of Roger's many-faceted career can be found on their Web site. Those wishing to do so are asked kindly to contribute, in Roger's memory, to: Union University Church, 29 North Main St., Alfred, NY 14802; Hart Comfort House, 141 East State St., Wellsville, NY 14895; The Lewy Body Dementia Association; or The Nature Conservancy.
Published by Hornell Evening Tribune from Jul. 17 to Jul. 18, 2021.
To plant trees in memory, please visit the Sympathy Store.
MEMORIAL EVENTS
Aug
21
Memorial service
2:00p.m.
Union University Church
Alfred, NY
MAKE A DONATION
MEMORIES & CONDOLENCES
0 Entries
Be the first to post a memory or condolences.