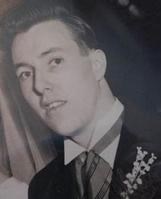 FUNERAL HOME
Brown & Powers Funeral Home
101 West Avenue
Angelica, NY
William John Timberlake Sr
William (Bill) John Timberlake Sr. passed away peacefully on July 19, 2021, at the age of 79, while vacationing in Cincinnati, Ohio.
He was born in Brooklyn, NY on December 2, 1941 to John and Marie (Karl) Timberlake. At the age of 15, he moved with his family to Queens Village where he met the love of his life, Susanne Catherine Rice.
Bill graduated from Martin Van Buren High School as a member of the Class of 1960. He then married Susanne on April 20, 1963 and eventually moved to Levittown, Long Island.
Upon completion of the New York City Police Academy, Bill became a Patrolman on June 26, 1963, spending most of his NYPD career at the 110th Precinct.
On August 12, 1977, he relocated his family from Levittown to Birdsall, NY. Bill traveled every weekend for a year to see his family in Birdsall until he retired from the NYPD in the summer of 1978.
After his retirement, Bill spent several years working as a police officer for the Alfred and Belmont Police Departments. On January 1st, 1984, Allegany County Sheriff, Larry Scholes, appointed Bill as his Undersheriff. He remained Undersheriff until his retirement from Allegany County in the summer of 2002.
Bill and his loving wife Susanne have 6 adoring children, Lisa (Robert Chamberlain) Timberlake of Angelica, NY, Bill (Renee) Timberlake Jr of Birdsall NY, James D. Timberlake, Brian (Nicole) Timberlake of Livonia, NY, Erin (David) Timberlake-Owens of Cincinnati, Ohio and Brooke Timberlake at home.
He was blessed with 16 grandchildren, Anthony, Ashley, Brian, Brittany, Brooke, Catherine, Colin, Dawson, Grace, Jack, James, Kristopher, Paige, Rileigh, Tiffany and Zim, along with 28 great grandchildren, 1 great-great grandson and many nieces and nephews.
Bill is survived by his sister Kate Finerfrock and sister in-law Diane Timberlake. He was predeceased by his Father, Mother, brother Jack, beloved son James, cherished grandson Jack Owens and loving niece Maria Fey.
Bill was a founding member, and first Chief, of the Birdsall Fire Department in the early 1980's. He was also a member and former Treasurer for the Angelica Lions Club and a Parishioner of Sacred Heart Roman Catholic Church in Angelica NY.
Later in life, he received his Associates Degree from Alfred State College majoring in Information Technology.
Bill enjoyed traveling and one of his favorite destinations was Ireland which he was able to visit twice with family members, including a 50th Anniversary trip in 2013 with Sue . He was an avid Civil War enthusiast and loved to work on remodeling his home in Birdsall. Bill's greatest love however, other than his family, was the Manchester United Football Club. In 2016, he had the pleasure of traveling to England with his son to watch Man U play at legendary Old Trafford Stadium.
Visitation will be held Friday, July 30th, from 1-3pm and 5-7pm at Brown and Powers Funeral Home located at 101 West Ave, Angelica NY.
A funeral Mass is to be held Saturday, July 31st, 11am at Holy Family Catholic Church, 5 Milton, Belmont NY followed by Interment at Until the Day Dawn Cemetery in Angelica.
In lieu of flowers donations can be made to The Michael J. Fox Foundation (for Parkinson's).
To send a remembrance to the family, please visit www.brownandpowersfuneralhomes.com or on [email protected] The family is being assisted by Chester A. Gosper IV, Director.
Published by Hornell Evening Tribune from Jul. 24 to Jul. 25, 2021.
To plant trees in memory, please visit the Sympathy Store.
MEMORIAL EVENTS
Jul
30
Visitation
1:00p.m. - 3:00p.m.
Brown & Powers Funeral Home
101 West Avenue PO Box 276, Angelica, NY
Jul
30
Visitation
5:00p.m. - 7:00p.m.
Brown & Powers Funeral Home
101 West Avenue PO Box 276, Angelica, NY
Jul
31
Funeral Mass
11:00a.m.
Holy Family Catholic Church
5 Milton, Belmont, NY
Funeral services provided by:
Brown & Powers Funeral Home
MAKE A DONATION
Please consider a donation as requested by the family.
MEMORIES & CONDOLENCES
Sponsored by Brown & Powers Funeral Home.
2 Entries
I knew Bill when I was a troublemaking teenager in Alfred village. He left an impression that I remember some 40 years later. He understood, "to serve and protect." Bill Timberlake was a good man.
Jim Gaisser
July 30, 2021
Bill was a friend of mine from the first day I walked into the Allegany Co. Sheriff's Dept. That friendship lasted for the next 30 years until his passing. He was always there for me and supported me. We were both a couple of old street cops who shared the same standards and spoke the same "language". He was always honest with me and never gave me cause to doubt him. I will miss him. RIP Bill, you were a good man.
Rick Lord
July 24, 2021
Showing 1 - 2 of 2 results