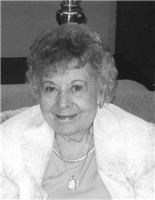 BORN
1922
DIED
2018
FUNERAL HOME
Stumpff Funeral Home & Crematory
1600 Southeast Washington Boulevard
Bartlesville, OK
Elsie Janine Jones Anderson passed away on August 2, 2018 at the Bartlesville Care Center from complications from Alzheimer's. Elsie was born on April 12, 1922 at Melvern, Kansas to Glenn Earl and Mary Irey Jones. She grew up in Iola, Kansas and attended Iola schools. She was married on November 9, 1942 to Dale Arthur Anderson. After Dale's discharge from the Army they made their home in Chanute, Kansas. Dale and Elsie operated C & A Truck Service and Elsie worked for the Glenn McClaren Insurance Agency. Elsie was a devoted member of the E.U.B. church, now the Otterbein Methodist Church. She was active in the women's guild and had many church friends that she maintained throughout her life. She and Dale were active members of the Chanute Elks club where Dale served as an officer. Elsie enjoyed going to many dances at the club and attending the annual Elks Conventions.
Dale and Elsie moved to Kansas City, Missouri in 1967. Elsie retired from the Sears company in 1987. She and Dale then moved to Grove, Oklahoma on Grand Lake. She and Dale were active members of the First United Methodist Church of Grove. They enjoyed playing cards and attending picnics with their church friends. Elsie was a member of Swope Park Chapter 620, Order of the Eastern Star.
Elsie is survived by daughter Marsha Pederson and husband John of Kansas City, Missouri. Son Randy Anderson and wife Marge of Bartlesville. Grandchildren Jeffrey Anderson and wife Julie of Bartlesville, Oklahoma. Ryan Anderson of Fairway, Kansas. Jared Pederson and wife Sarah, Jacob Pederson, Megan Pederson and fiancé Jason Clarkson, all of Kansas City, Missouri, five great grandchildren, many nieces and nephews. Elsie was preceded in death by her parents, husband Dale, brother Henry Jones and grandson Jason Anderson.
In lieu of flowers the family suggests donations to the Bartlesville Public School Foundation, or The First United Methodist Church of Bartlesville.
Graveside services were held at 11 A.M. on Saturday, August 4, 2018 at the Memorial Park Cemetery with Rev. Paul Overholt officiating. Services and interment were under the direction of the Stumpff Funeral Home & Crematory.
Friends who wish may sign the online guest book and leave condolences at www.Stumpff.org.
Published by Examiner-Enterprise from Aug. 5 to Sep. 4, 2018.
To plant trees in memory, please visit the Sympathy Store.
MEMORIAL EVENTS
To offer your sympathy during this difficult time, you can now have memorial trees planted in a National Forest in memory of your loved one.
Funeral services provided by:
Stumpff Funeral Home & Crematory
MAKE A DONATION
MEMORIES & CONDOLENCES
5 Entries
My deepest sympathy goes out to the family. May you find comfort from our God of comfort during this difficult time Act 24:15

BC~
California
August 17, 2018
As you remember your love one, as God heals your broken hearts (Psalm 147:3), may your treasured memories bring you peace, comfort, and strength to endure.
August 16, 2018
We are sorry to learn of the passing of Elsie. She & Dale were special people, and active members of our Fellowship SS Class here in Grove. Frank & Evelyn Houck
August 7, 2018
I am sorry to read about the loss of your loved one. May God's loving-kindness comfort and help you through this difficult time. (Psalms 119:76)
August 6, 2018
Offering our deepest condolences during this difficult time.
Stumpff Funeral Home
August 5, 2018
Showing 1 - 5 of 5 results