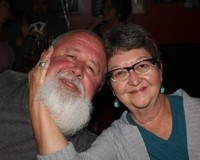 BORN
1947
DIED
2021
FUNERAL HOME
Stumpff Funeral Home & Crematory
1600 Southeast Washington Boulevard
Bartlesville, OK
Gloria Jones
Bartlesville - Gloria Jean Jones, 74, of Bartlesville, died at 11:45 A.M. on Sunday, July 4, 2021 at her home in Bartlesville.
Gloria Jean Jones was born in Bartlesville, Oklahoma on March 17, 1947 the daughter of Willard L. Henshall and Serviana (Martinez) Henshall. She grew up and received her education in Bartlesville and graduated from College High School. She was employed as a keypunch operator with Phillips Petroleum Company in Kansas City and later in Bartlesville. She was employed with the Bartlesville School system at Madison Junior High until her employment as a cashier at Boulevard Pharmacy for a number of years until her retirement. She was married to Johnny Ray Jones on August 30, 1980 in Bartlesville and they have made their home here since that time. She was a member of St. John at the Latin Gate Catholic Church. Gloria enjoyed going to the Eagles Lodge in Oologah and enjoyed the 4th of July festivities every year and playing bingo when Johnny was a member. She enjoyed her three grandsons so much and they adored Nana. Gloria and Johnny owned a bar called Johnny's Place and enjoyed all the people that they met there while watching the OU games and celebrating birthdays and anniversaries. Many dear friends were made at the bar. Gloria later enjoyed going to the Elks Lodge and enjoyed playing shuffleboard and socializing. Gloria was a devoted wife, mother, grandmother and aunts. Her nieces and nephews were especially fond of the "Auntie G".
Gloria is survived by her husband, Johnny Ray Jones of Bartlesville, one daughter, Stephanie Jean Mata of Bartlesville, one son, Joshua Ray Jones and wife Cashmere of Bartlesville, three grandchildren, Christian Ray Jones, Christopher Jones and Gabriel Mata. She was preceded in death by her parents and one brother, Johnnie Henshall.
A Rosary will be held at 7 P.M. on Wednesday, July 7, 2021 in the Stumpff Funeral Home Chapel. The Funeral Mass will be held at 2 P.M. on Thursday, July 8, 2021 at St. John Before The Latin Gate Catholic Church. Interment will follow in the White Rose Cemetery directed by the Stumpff Funeral Home & Crematory.
Friends who wish may sign the online guest book and leave condolences at www.stumpff.org.
Published by Examiner-Enterprise from Jul. 6 to Jul. 7, 2021.
To plant trees in memory, please visit the Sympathy Store.
MEMORIAL EVENTS
Jul
7
Rosary
7:00p.m.
Stumpff Funeral Home & Crematory
1600 Southeast Washington Boulevard, Bartlesville, OK
Jul
8
Funeral Mass
2:00p.m.
St. John Before The Latin Gate Catholic Church.
OK
Funeral services provided by:
Stumpff Funeral Home & Crematory
MAKE A DONATION
MEMORIES & CONDOLENCES
3 Entries
Johnny so sorry for your lose , she was a very sweet and kind lady. My thoughts and prayer for you and family.
Bill Loudermilk
July 10, 2021
Offering our deepest condolences during this difficult time.
Stumpff Funeral Home
July 6, 2021
May God bless you and your family in this time of sorrow.
Carlene Zimmerman
Friend
July 6, 2021
Showing 1 - 3 of 3 results