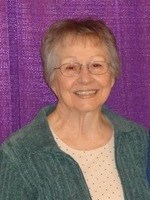 BORN
1931
DIED
2020
ABOUT
William Chrisman High School
FUNERAL HOME
Speaks Suburban Chapel
18020 E. 39th St. S
Independence, MO
Dorothy "Ruth" Bates
Dorothy "Ruth" Ward Bates passed away Friday, March 27th, 2020 at her home. She was born on November 21, 1931 in Independence, MO to Ernest and Odell Ward. She attended Ott Elementary School, Palmer Junior High and William Chrisman High School, graduating in 1949. After high school she attended one year at Central MO State College, then worked at Grinter Photography Studio in Independence. After dating through high school, Ruth married David Bates on June 1, 1951 in Independence MO at the West College RLDS church. They began their married life in a furnished apartment on N. River in Independence. In 1951, with the Korean War draft approaching, Dave enlisted in the Air Force. Ruth joined Dave in Champaign, Illinois and found employment at Fletcher's Camera Store and Photography Studio. In 1953, they were assigned to Ent Air Force Base in Colorado Springs, CO. She again found employment at another Photo Shop during their years there. Air Force enlistment was completed September 1955, and they moved to Rolla, MO. Dave completed his bachelor's degree in mechanical engineering at the University of Missouri School of Mines and they welcomed their first child, Susan there. After Dave's graduation they moved back to Independence and they welcomed 2 more children Carol and David to the family. In 1966, they moved to Kansas City, MO. Ruth was a stay at home mom in the early years with her children. She was active in PTA, Sunday School Teacher, Girls programs, and Vacation Bible School leader. She was always there for the kids in the neighborhood and a good neighbor to all. In 1971, Ruth resumed college studies, first obtaining an associate degree from Longview Community College then transferring to UMKC. She graduated in 1974 with a BA in Elementary Education. A few years later, she went back to UMKC and earned her Masters Degree in Reading. She was a substitute teacher for 4 years, then taught full-time in the Raytown School district until June 1997 when she retired at age 66. Ruth, with Dave, traveled to many places, loved getting together with friends, family, and their high school class of 1949ers breakfast bunch. Ruth was preceded in death by her husband of 54 years, her daughter Susan Parretta and her parents. She is survived by her sister, Sue Wallenberg, son-in-law Joe Parretta, daughter Carol Bates Hakes (Brad), son David L. Bates as well as 6 grandchildren, Christina Parretta (Adam Bullard), Jill Parretta Weishaar (Jeff), Cara Hakes Stiegler (Kevin), Lisa Hakes (Rocky Rigoli), Nicholas Bates, Samantha Bates and 4 great-grandchildren, Dakota Weishaar, Riley Weishaar, Addison Montgomery and Reese Stiegler, as well as, many nieces and nephews and extended family members. Ruth accomplished whatever she put her mind to. She was artistic, taught herself to sew, enjoyed reading and learning, and researching our family genealogy. She even got a cell phone and learned to text in her 80's! Her church family at Raytown Community of Christ, Raytown Retired Teachers and School Personnel Association, REAP, and the Raytown Community Inter Faith Alliance were all very important to her. She was loved by so many and will be greatly missed. A visitation will be held from 9-10am, Saturday August 28th with a 10am memorial service, both at Speaks Suburban Chapel in Independence. Inurnment will follow at Mound Grove Cemetery. Online condolences may be expressed at www.speakschapel.com (Arrangements: Speaks Suburban Chapel 816-373-3600)
Published by The Examiner from Jul. 30 to Jul. 31, 2021.
To plant trees in memory, please visit the Sympathy Store.
MEMORIAL EVENTS
Aug
28
Visitation
9:00a.m. - 10:00a.m.
Speaks Suburban Chapel
18020 E. 39th St. S, Independence, MO
Aug
28
Memorial service
10:00a.m.
Speaks Suburban Chapel
18020 E. 39th St. S, Independence, MO
Funeral services provided by:
Speaks Suburban Chapel
MAKE A DONATION
MEMORIES & CONDOLENCES
Sponsored by Speaks Suburban Chapel.
0 Entries
Be the first to post a memory or condolences.