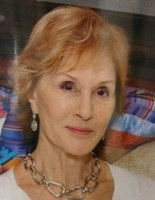 ABOUT
William Chrisman High School
Marilyn Kathryn Harris Klees
Marilyn Kathryn Harris Klees, 81, of Weston, Florida passed on July 17, 2021, succumbing to complications of strokes experienced in May and June. She passed beyond the curtain of mortality in her daughter's Miramar, Florida home surrounded by her three children (Wolfgang, Blake and Michelle) and other close family members. Marilyn was preceded in death by her parents, Merrill and Jean Harris, her brother Dale, and her husband, Nelson Klees.
Marilyn was raised in Independence, Missouri and graduated from William Chrisman High School in 1957. During her high school years, she was a cheerleader, queen of the East-West Shrine college basketball all-star game, and Miss Cadillac at the Kansas City Auto Show. Post-high school, Marilyn was a professional model for several years. She married Don Mustain and they had three children during their 18 years of marriage. Several years after her divorce, she married Nelson Klees and they resided in Ft. Lauderdale until his death in 1998. Marilyn and Nelson shared a marvelous love for one another. Marilyn's professional life, beyond modeling, included work for Bendix, Barclay's Bank, the Wendy's Corporation, and the Florida Panthers. She was once "discovered" and contracted to be in a Hollywood movie in the mid-1960's, but an illness and an accident involving the lead actress and director prevented the movie from materializing. She sometimes joked that she was the "has been who never was."
Marilyn had a zest for life and overcame numerous obstacles with grace and poise. Her loved ones and friends describe her as classy, elegant, intelligent, witty, charismatic, sentimental, compassionate, adventuresome, intellectually curious, and down-to-earth. She was a great example of the adage: "Things seem to turn out best for those who make the best of the way things turn out." She traveled extensively, especially in Europe and the Caribbean. Marilyn adored her children and grandchildren and their families. She loved antique shopping and sometimes even purchased items that would complement her longtime home in Weston. Marilyn was a lifelong member of The Church of Jesus Christ of Latter-day Saints and previously served in various volunteer roles in the church.
Marilyn is survived by her children Wolfgang Mustain of Miami, FL, Blake (Alicia) Mustain of Boca Raton, FL, Michelle (David) Treloar of Miramar, FL, her brother David (Carol) Harris of Mesa, AZ, numerous nephews and nieces, and her grandchildren Joey, Whitney, Brittany, Maddie, Cameron, Nicole, Aspen, and Remie, as well as six greatgrandchildren (Clair, Graeme, Noah, Dean, Andy, Bradley, and Abbey).
A private memorial service will be held. Donations in Marilyn's honor may be made to the Lighthouse for the Blind and/or to https://philanthropies.churchofjesuschrist.org/missionary
Published by The Examiner from Jul. 26 to Jul. 27, 2021.
To plant trees in memory, please visit the Sympathy Store.
MEMORIAL EVENTS
To offer your sympathy during this difficult time, you can now have memorial trees planted in a National Forest in memory of your loved one.
MAKE A DONATION
MEMORIES & CONDOLENCES
0 Entries
Be the first to post a memory or condolences.