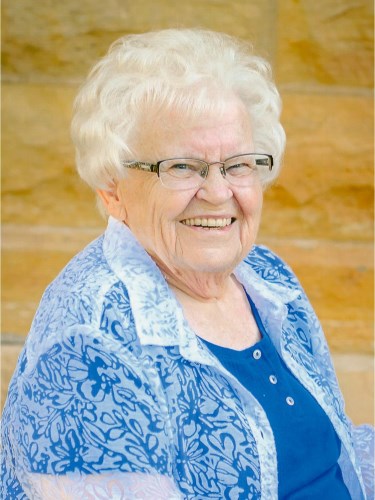 Barbara Jean, the daughter of George and H. Beldora (Skaar) Mullenberg was born on August 17, 1936 in Faribault. She attended Bethlehem Academy High School and graduated with the class of 1954. On January 12, 1957 she was united in marriage to Walter H. Duchene at St. Lawrence Catholic Church. Wally preceded her in death on Sept. 1, 2012. Barb stayed at home when their children were growing up and later attended Faribault VoTech and received her LPN degree. She worked for over 22 years for the State of Minnesota at the Faribault Regional Center and later with the different group homes in the area. In retirement she volunteered at the front desk at the Divine Mercy Catholic Church office. She was an active volunteer and also enjoyed her weekly hour at the Adoration Chapel. She loved spending time with all of her family and also enjoyed baking, crocheting, cross stitch, downhill skiing, cross country skiing and was an avid sports fan and liked to watch the Twins and Vikings. She was a member of the Knights of Columbus Ladies Auxiliary.

Barb was able to be in the comfort of her home during her illness and the family would like to thank all of the many family members that assisted so she could be there until her passing.

Mass of Christian Burial will be held on Friday, April 9, 2021 at 10:30 a.m. at the Divine Mercy Catholic Church with Fr. Cory Rohlfing officiating. Interment will be held at St. Lawrence Cemetery, Faribault. For those unable to attend, the service will be livestreamed through a link found on Barb's obituary page.

The family prefers that memorials be directed to Bethlehem Academy High School or Divine Mercy Catholic Church in memory of Barb.

Arrangements are being completed by the Parker Kohl Funeral Home & Crematory of Faribault.