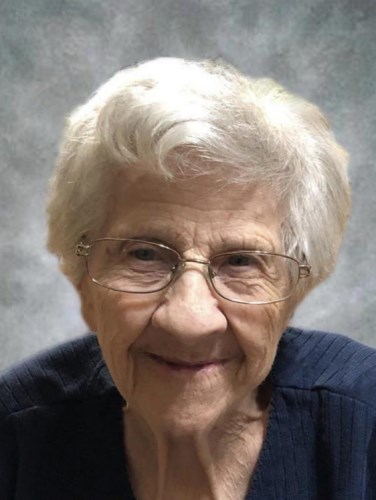 Funeral services will be held at Boldt Funeral Home, Faribault on Thursday, April 8, 2021 at 10:30 a.m. The Reverend Janet White will officiate. Interment will be at Meadow Ridge Memorial Park, Faribault. Visitation will be for one hour prior to the service at the funeral home on Thursday.

Jeannine M. was born November 10, 1928, the daughter of Donald and Lillian (Dutcher) Knapp in Faribault, the oldest of 11 children. She attended and graduated from Faribault High School in 1946. On September 29, 1949 she was united in marriage to Melvin Bauer. They had three children, Bradley, Anna and Calvin. Jeannine worked for Sears Roebuck, Nutting Truck & Caster Company and Lavender Inn. She loved to read, knit and spend time with her grandchildren and great-grandchildren.

Survivors include her children, Bradley (and JoAnn) Bauer of Faribault, Anna (and Kenny) Lake of Faribault and Calvin (and Kathy Carlson) Bauer of Brooklyn Park; many grandchildren, great-grandchildren; sisters, Virginia Rosenau, Donna Harger, Margaret Beaupre and Sandra (and Bert) Kline; brothers, Jerry (and Mary Jean) Knapp, David (and Julie) Knapp and Fran Knapp; many nieces, nephews, other relatives and friends.

Visit boldtfuneralhome.com for information and guestbook.