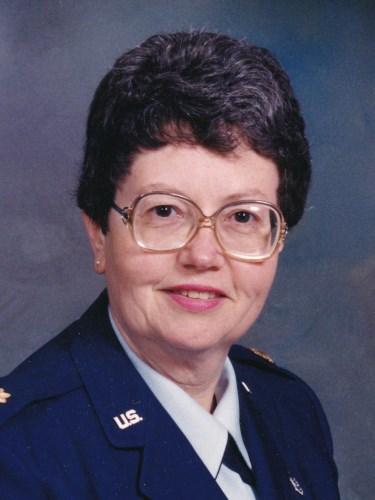 Born in Waseca, Minnesota on December 6, 1945 to Kennard and Delora (Beese) Kanne, Korrinne Kanne was the second of four children. She grew up across the street from Trowbridge Park, graduating from Waseca High School in 1963. Korrinne graduated from Naeve Hospital School of Nursing, Albert Lea, in 1966. At age 21, Korrinne's self-proclaimed "adventuresome spirit" led her to Ghost Ranch in Abiquiu, New Mexico, where she trained to become a Peace Corps Volunteer. As a member of Korea IV, Korrinne served in the first public health focused Peace Corps group to enter South Korea in 1967. After two years of Peace Corps Service and time spent traveling abroad, she returned to her job as a nurse at Midway Hospital in Saint Paul. In 1972 she joined the United States Air Force. She served 20 years, through Operation Desert Shield/Storm, retiring in 1992 as a Major with decorations including a Meritorious Service Medal, National Defense Service Medal, and an Air Force Outstanding Unit Award. During her time in the military, she earned a bachelor's degree and trained as a registered nurse at University of Mobile Alabama. Korrinne was stationed all over the country, from Alaska to Arkansas, but was most proud to be able to return to Korea as an Air Force nurse. After retiring from service, Korrinne put her energy into her family, acting as "Major Nanny" to her niece and nephews, and taking expert care of her parents in their advanced age. Korrinne kept up her nursing license, working for Comfort Home of Owatonna, Saint Lucas of Faribault, and in Rice County Public Health. Korrinne served her community and congregations as a Parish Nurse, met regularly with her fellow retired Air Force nurses, and travelled on many medical mission trips to Sierra Leone with a team from AfricaUplifted. She enjoyed lending a hand with Lynn Cook and friends at The Nook and Cranny gift shop of Faribault.

She was preceded in death by her parents, siblings Kevin Kanne and Karen Kolas, and brother-in-law David Kahnke. She will be missed by friends from around the world.

Visitation will be held on Wednesday, March 31, 2021 from 4:00 - 7:00 p.m. at the Parker Kohl Funeral Home, 1725 Lyndale Ave. N. Faribault. Masks/face coverings are required for attendees. Interment with military honors will be held at the Fort Snelling National Cemetery in Minneapolis on Thursday at 11:00 a.m.

Korrinne's family plans to have a memorial service to be held this summer at Hope United Methodist Church in Faribault.

In lieu of flowers, memorials will be directed to Korrinne's favorite charities.