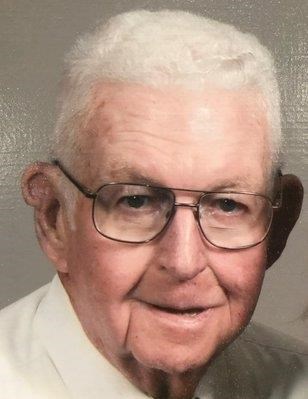 Eden - Patrick F. O'Brien, 84, of Eden passed away on Wednesday, May 15, 2019 at St. Agnes Hospital with his family gathered around him. He was born in Fond du Lac on July 27, 1934, the son of James H. and Estelle M. (nee Stack) O'Brien. Pat served in the U.S. Army during the Korean War from 1953 until 1955. On June 7, 1958, Pat married Marilyn R. Laudolff at St. Mary's Catholic Church in Fond du Lac. He ran his own trucking business and then began working at the Lomira Auction Market. Pat along with his brother Jim joined their father and uncle in running O'Brien Brothers Auctioneers doing farm and household auctions, a business started in 1920. Pat also worked at the Milwaukee Stock Yard and was involved in O'Brien Livestock. He was a member of Shepherd of the Hills Catholic Church, the Knights of Columbus, Catholic Order of Foresters, the Empire Thresheree, the Eden Volunteer Fire Department, was a lifetime Member of the Eden Fire Department Association, and the Wisconsin Auctioneers Association. Pat was also involved in the FFA, the O'Brien Scholarship and in area 4-H Clubs. He did auctioneering at many county fairs, the Wisconsin State Fair, and at numerous benefit fundraisers. He also did auctioneering and was a member of Duck's Unlimited. Pat enjoyed going to casinos, fishing, attending his grandchildren's sporting events, but most of all, spending time with family and friends.

A Mass of Christian Burial for Pat will be held at 10:00 a.m. on Saturday, May 25, 2019, at Shepherd of the Hills Catholic Church, W1562 County Road B, Eden. Rev. Mark Jones will officiate and burial will follow at St. Mary's Cemetery in Eden.

In lieu of flowers, memorials are appreciated to Shepherd of the Hills Parish, Congregation of the Sisters of St. Agnes, the O'Brien Scholarship, Father Mike Shea's Sarnelli House or Eden Fire Department and First Responders.

The family extends a special thank you to the doctors, nurses and staff of St. Agnes Hospital for the care and concern shown Pat.

Twohig Funeral Home is serving the family with condolences and guestbook at www.twohigfunerals .com.

Published by Fond du Lac Reporter on May 19, 2019.
To plant trees in memory, please visit the Sympathy Store.
MEMORIAL EVENTS
May
24
Visitation
2:00p.m. - 7:00p.m.
Twohig Funeral Home - Campbellsport
109 West Main Street, Campbellsport, WI
May
25
Visitation
8:00a.m. - 10:00a.m.
Shepherd of the Hills Catholic Church
W1562 County Road B, Eden, WI
May
25
Mass of Christian Burial
10:00a.m.
Shepherd of the Hills Catholic Church
W1562 County Road B, Eden, WI
Funeral services provided by:
Twohig Funeral Home - Campbellsport
MAKE A DONATION
MEMORIES & CONDOLENCES
Sponsored by Twohig Funeral Home - Campbellsport.
15 Entries
May God bless you and your family in this time of sorrow.
Mike & Shirley Schmitz
May 10, 2020
Deepest sympathy to the family. We will miss him.
Jim Vollmer
May 25, 2019
I'm sorry for your loss. My thoughts and prayers are with you.
Dianne Baumann
Acquaintance
May 24, 2019
Pat was a great supporter of 4-H and FFA youth. He always worked hard to make sure the bidders at the Waushara County Junior Livestock Auction fully supported our youth's livestock projects. He always had a smile and kind word to say to those he came in contact with. He touched the lives of many and his many contributions throughout Wisconsin will be remembered.
Barb Barker
Acquaintance
May 24, 2019
Our deepest sympathies to Marilyn & family. Pat was the best. When ever i needed a port-a-potty he delivered. Literally! Please celebrate the life he lived! He always had a joke to brighten your day. Pat may you rest in peace & keep those Irish eyes a smiling. You will be deeply missed & thank you for all you did for our youth in 4H & FFA! Love ya! Paula & Terry Klumpyan
Paula Klumpyan
Friend
May 22, 2019
Pat always had a smile on his face and a good word for everyone. You will be dearly missed, Pat.
Colleen Kottke
Friend
May 22, 2019
I got to believe that the Good Lord, and Sister Michaela, are enjoying a korbel manhattan with Pat as he entertains them with his witty sense of humor. May he rest in peace after a life well lived.
My condolences to Marilyn and the entire family. Pat was a wonderful human being.

Wayne Huberty
Wausau, WI
May 21, 2019
We have the whole family in our prayers Pat will be missed by many. He was such a great man to our area.
May 21, 2019
Our family sends our deepest sympathies to you Marilyn and family in the loss of this great man. We have many memories of our dad, Earl TerBeest and Pat. May you find peace from God our Father during this time.
Family of Earl Ter Beest
May 20, 2019
May your hearts soon be filled with wonderful memories of joyful times together as you celebrate a life well lived.
michael & shirley Schmitz
May 19, 2019
Deepest sympathy to the Obrien family. Mr. Pat was the greatest. I am sure Leo and Agnes are happy to see their good friend again!
Carol Murphy
May 18, 2019
Marilyn and family;
May God be your comfort and strength in the days to come and will keep you in our thoughts and prayers! He will be missed by many! Kens recovering from knee replacement so we won't get to the visitation. .
Ken & Diane Majerus
May 17, 2019
Such an upstanding and likeable man. He always smiled and chimed in with his Irish wit. May his soul rest in peace as he sees the face of God.
Carol Oelhafen
May 17, 2019
Deepest Sympathies to all! He was a great Servant to all who knew Him
We are out of State and wished we could of attended the services
Chuck and Sheila Loehr
Sheila Loehr
Acquaintance
May 17, 2019
My condolences to the O'Brien and Flood families. I remember Mr. O'Brien and the family from my earliest years, and through the connection my mom always had with the O'Brien's, especially Sister Michaela.
Jane Puddy Ricchio
Acquaintance
May 17, 2019
Showing 1 - 15 of 15 results