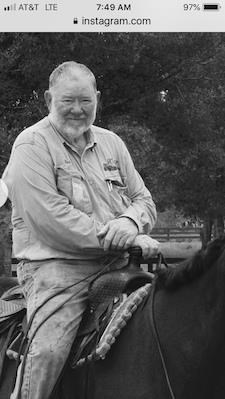 Fellsmere - Roy E. Platt, beloved husband, father, grandfather and generational native Floridian, has joined our Lord and Savior. Roy passed in peace on his own terms with bravery and dignity with his family by his side in the early morning hours of July 13, 2021.

Roy was born October 28,1948 in Melbourne, FL to Marjorie and Minor Platt, a Rancher. Roy and his six siblings lived a simple but extraordinary life, with plenty of room to roam the wilds of Florida, through palmettos and pine, to hunt, fish and work cattle. Early on, Roy took a keen interest in the land clearing equipment used on the ranch, becoming savvy in operation and repair. In years to come, he would take that expertise and turn it into a business of land clearing, which his son, Rep continues today. He became an experienced welder, and turned that talent into an art form. He once welded a life size horse for the Silver Spurs Parade!

His mother had more interest in sports than cattle, and much to his father's disapproval, saw to it that her boys were constantly active in sports. Her spot on the bleachers was never empty; she was always there, cheering them on. Consequently, in 1965, Roy was Offensive Guard for the Melbourne High School football team, winning second in the State Championship that year. In 1965-66 he participated in high school rodeo, winning Florida All Around Champion, but the demands of the ranch left little time for competition.

In 1969, Roy was blessed to marry Sandra Chesser, who also came from a ranching family. They were a seamless match because they shared so many commonalities. Together, they built a life on a foundation of love and respect, and a ranching business. For the next 52 years, they raised their two children, and saw seven cherished grandchildren born. In 2013, just when life could not have been better, they lost their treasured daughter. Although she had blessed them with four granddaughters, Christi was the apple of Roy's eye, the love of his life. It was a loss that he never recovered from. His last words were that he was ready to go to be with his Christi.

Roy was a man to be admired for his slow and easy demeanor, like a calm in the midst of a storm; strong, steady, never wavering. He had a Will Rogers philosophy; profound truth in few and simple words. And like Will Rogers, Roy believed that "worrying is like paying on a debt that may never come due." He did not worry…and he did not hurry, ever! Roy lived his life unhurriedly and enjoyed every simple moment like a prime cut steak. He had a keen wit and could target someone's Achille's heel with precision.

Roy was a devoted husband, loving father, adored grandfather and loyal friend. He will be deeply mourned and painfully missed by so many.

Peace I leave with you; my peace I give you. I do not give to you as the world gives. Do not let your hearts be troubled and do not be afraid. (John 14:27)