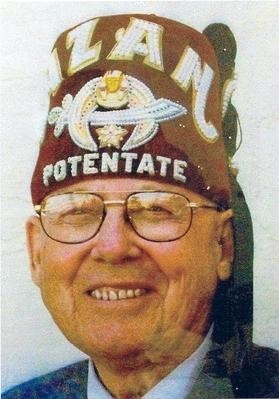 He was born in Johnson City, NY on July 30, 1923. He served his county for 26 years as an Air Defense Officer, including seven years as a Senior Paratrooper, with the 82nd (All-American) Airborne Division earning three battle stars in World War II in the Battle of the Bulge, the Ardennes, the Huertgen Forest and Central Germany. In the early 50s, he served with the 11th Airborne Division at Fort Campbell, KY. During the Korean Conflict, 1951-1952 he earned four battle stars. Other decorations included the Army Commendation Medal and the Belgian Fourraguerre. Following military retirement in 1968, he became a real estate broker. During the next 22 years, he owned and managed several successful real estate companies.

Bill was a member of Theta Delta Chi. He was a Past Master and life member (MIP) of Palma Vista Masonic Lodge, No. 205 and later, transferred membership to Palm Bay Lodge, No. 397. He was a life member 32nd Degree of the Scottish Rite Bodies, Valley of Miami. He was a Past President of the Cape Canaveral Chapter, National Sojourners and a member of the Heroes of '76 Patrick AFB. He was a Compatriot in the Brevard Chapter, Sons of the American Revolution, a member of the Military Officers Assn of America and was a life member of VFW Post #8191. An active Shriner, he was a Past President of the AZAN Melbourne Golfers, a Past Commander of the AZAN Legion of Honor, Past Commodore of the AZAN Yacht Club. He was Potentate of AZAN Shrine, A.A.O.N.M.S., Melbourne in 2004.

Visitation will be at 9 AM and funeral services at 10 AM at the AZAN Shriners Centers, 1591 W. Eau Gallie Blvd., Melbourne, FL, on Tuesday, March 18th, 2014. Memorial contributions can be made to the AZAN Hospital Transportation Fund, c/o AZAN Shriners Center. Interment with full military honors will be at Arlington National Cemetery.

Published by FloridaToday from Mar. 15 to Mar. 17, 2014.
To plant trees in memory, please visit the Sympathy Store.
MEMORIAL EVENTS
To offer your sympathy during this difficult time, you can now have memorial trees planted in a National Forest in memory of your loved one.
Funeral services provided by:
Beckman Williamson Funeral Home
MAKE A DONATION
MEMORIES & CONDOLENCES
0 Entries
Be the first to post a memory or condolences.