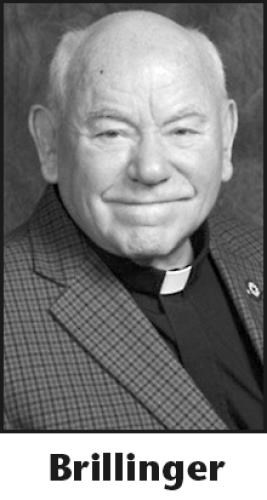 BORN
1931
DIED
2021
FUNERAL HOME
Zwick and Jahn Funeral Home
520 N 2nd Street
Decatur, IN
REVEREND OTTO ARNOLD BRILLINGER, 90, God called him home to Heaven on Monday, Sept. 13, 2021. "Our Savior Jesus Christ has destroyed death and brought life and immortality to light through the Gospel." God worked through His servant, Reverend Otto Arnold Brillinger. Otto was given life by his creator and was born on April 3, 1931, the child of Alexander and Helene Brillinger. On April 11, 1931, Otto received the gift of Holy Baptism and became a child of God. On September 21, 1945 he publicly confessed his faith and was confirmed. On Aug. 6, 1960 He received the gift of a beloved companion in his spouse, Mildred Loretta Evenson. They were blessed with children, Catherine and Daniel, as well as a young baby and a daughter Carol Ann who both died before birth. Mildred went to her heavenly home in December of 2013. On September 5, 2015 he received the gift of another beloved companion in his spouse, Jean Ann Franz. Otto served his country in the United States Air Force from 1953 to 1957. He served in France and also in the United States. He was awarded the National Defense Service Medal and the Good Conduct Medal. During his time in the Air Force he became a U.S. Citizen, and he also felt God's Call to become a Pastor. God blessed Otto's life with many special people as he served God as a pastor and missionary. Otto attended Concordia Theological Seminary in Springfield, Ill., from 1958 to 1964 when he graduated. He was then ordained at his home congregation, Concordia Lutheran Church of Cincinnati, Ohio, in July of 1964. He served the following Lutheran congregations in Canada: St. Matthew of Calgary, Alberta, St. Peter of New Hamburg, Ontario, and St. Paul of Tavistock, Ontario, and First Lutheran of Kingsville, Ontario. He served the following Lutheran congregations in Decatur, Ind.: Zion-Friedheim and Immanuel-Union Township. He served the following Lutheran churches in Texas: St. Matthew Westfield, St. John Lincoln, and Immanuel of Copperas Cove. He also served Peace Lutheran of Chicago and Bethlehem of Glen Arbor, Mich., and St. Paul of Good Harbor, Mich. After his retirement in 1993 he was a faithful member of congregations in Texas and Indiana. He also began his work overseas. He worked with congregations in Nigeria, Lithuania, Kazakhstan, and Spain. He traveled as long as he was able, but he still had regular contact with several congregations and pastors around the world. He leaves to mourn his wife, Jean of Decatur, Ind.; brother, Erwin Brillinger of Milford, Ohio; daughter, Catherine Carr of Pennsylvania; and son, Daniel (Anita) Brillinger of Noblesville, Ind. His grandchildren and great-grandchildren will miss him dearly. He leaves to mourn grandson, Eric (Nora) Carr and great-grandchildren, Ronan and Edven, both of Davenport, Iowa; granddaughter, Ana (Jacob) Deal and great-grandchildren Isaiah, Titus, and Loretta, all of Sharon, Pa.; grandson, Michael (Allie) Carr and great-grandson, Levi; granddaughter, Cecelia Brillinger of Bryan/College Station, Texas; grandson, Sasha Carr of Pennsylvania; and granddaughters, Clarissa and Serena Brillinger, both of Noblesville, Ind. He was preceded in death by his parents; wife, Mildred; two children: a very young baby, who died before growing to full term and a daughter, Carol Ann, who died right before birth on Dec. 23, 1963; and son-in-law, Rev. Timothy J. Carr. "Precious in the sight of the Lord is the death of his saints." Funeral service is 11 a.m. Wednesday, Sept. 22, 2021, at Immanuel Lutheran Church, Union Township, 8538 North 500 East, Decatur (IN 46733), with the Reverend David Koeneman officiating. The service will be livestreamed on the Zwick and Jahn Facebook page. https://www.facebook.com/Zwick-Jahn-Funeral-Homes. Due to covid concerns there will not be a visitation. Graveside service is 3 p.m. Wednesday, Sept. 22, 2021, at Crownland Cemetery, 1776 Monument St., Noblesville (IN 46060). In lieu of other expressions of sympathy, memorials are appreciated to Concordia Theological Seminary Brillinger Endowment Fund, 6600 N. Clinton St., Fort Wayne, IN 46825 (be sure to designate Brillinger Endowment Fund). Memorials can be obtained through Zwick & Jahn Funeral Home in Decatur. Arrangements by Zwick & Jahn Funeral Home, in Decatur, Ind. Assisting Funeral Director - Ray Ackerman of Schultz Funeral Home, DeWitt, Iowa. For complete obituary information and to sign the online guestbook, visit www.zwickjahn.com
Published by Fort Wayne Newspapers on Sep. 19, 2021.
To plant trees in memory, please visit the Sympathy Store.
MEMORIAL EVENTS
Sep
22
Funeral service
11:00a.m.
Immanuel Lutheran Church, Union Township
8538 North 500 East, Decatur, IN
Funeral services provided by:
Zwick and Jahn Funeral Home
MAKE A DONATION
MEMORIES & CONDOLENCES
1 Entry
Pastor Brillinger patiently led me (Thomas) thru confirmation classes and confirmed me at Peace church in 1970. He also married Karen and I on Oct. 17th 1971. I was looking for his location as Karen and approach our 50th anniversary and was saddened to see his passing. Our thoughts and prayers extend to his family.
Thomas & Karen Vittoe.
September 23, 2021
Showing 1 - 1 of 1 results