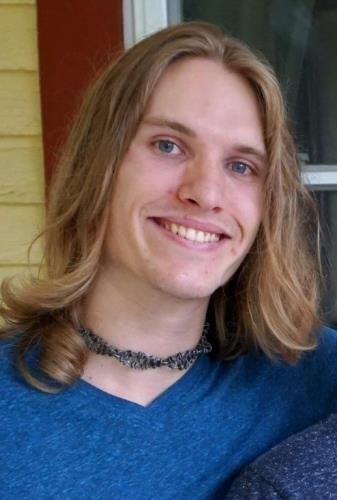 Brycen was a beloved family member, friend and Seacoast N.H. community member whose beautiful, creative, gifted and brilliant mind and spirit touched so many lives. Brycen cherished his family and friends and was happiest when he was among them. Brycen was the lead vocalist and songwriter for his metal band, Serenade II Darkness, which frequented The Stone Church in Newmarket, N.H., in 2012 and 2013. With SIID, Brycen produced three studio demos and performed around N.H. Brycen's music focused on raising awareness to the traumatic affects of child abuse and neglect.

Brycen started a business at age 12 selling his plush "Feendz" around the N.H. Seacoast, as well as a small business at age 17 selling his handcrafted chainmaille jewelry. From the age of 12, Brycen spoke at conferences alongside his mother, advocating for homeschooling, children's rights and non-violent attachment parenting. He also ran workshops on chainmaille crafting and musical instruments at homeschool conferences between the ages of 17-19. Brycen appeared in the media several times, including on the national Anderson show as part of his children's rights advocacy. At only 12, Brycen began co-mentoring a disadvantaged 12 year old boy with his mother.

Brycen was involved with several community volunteer efforts over the years, including the IOKA Theater restoration efforts. He ran a homeschool Bionicle/Lego club in Greenland, N.H., from ages 12-18. Between the ages of 12-18, he was involved with The N.H. Theatre Project, Con Tutti choral group, The Phillip's Exeter Academy's Glee Club and The N.H. Youth Chorus. At the age of 18, Brycen was a member of the Junior Climbing Rock Climbing Team at Indoor Ascent in Dover, N.H.

Brycen was a beloved and vibrant member of the Indoor Ascent community, working there as a climbing instructor since the age of 18. Most recently, Brycen had also worked for Blue Dolphin Screenprinting in Somersworth, N.H. Brycen was a gifted musician, songwriter, artisan and writer, inventing several table-top RPG games. Brycen loved climbing, outdoor activities, LARP-ing and playing table-top role playing, card and dice-based games such as Dungeons and Dragons 3.5, Pokemon, and Magic: The Gathering. In 2015, Brycen ran his own custom RPG game campaign at Stairway to Heaven Comics. He was also involved with game events at Jetpack comics.

SERVICES: A Celebration of Life will be held in Brycen's honor on Tuesday, October 10, 2017, at the Cara Irish Pub, 11 Fourth Street in Dover, N.H. Also, a GoFundMe page to help our family with Brycen's burial and grave costs has been set up at: https://www.gofundme.com/brycencouture. www.brewittfuneralhome.com.

Published by Foster's Daily Democrat from Oct. 6 to Oct. 9, 2017.
To plant trees in memory, please visit the Sympathy Store.
MEMORIAL EVENTS
To offer your sympathy during this difficult time, you can now have memorial trees planted in a National Forest in memory of your loved one.
Funeral services provided by:
Brewitt Funeral Home
MAKE A DONATION