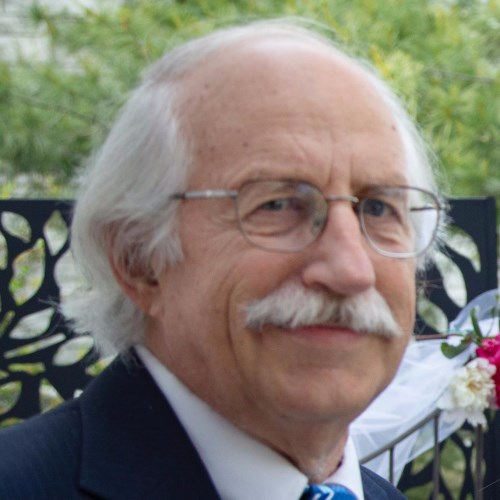 BORN
1948
DIED
2021
FUNERAL HOME
Stauffer Funeral Home
1621 Opossumtown Pike
Frederick, MD
Bruce Hawkins Kenworthy, of Braddock Heights, Maryland, passed away on October 8, 2021. Bruce was born on September 19, 1948 to Joseph Kenworthy and Nancy Hawkins in Abington, Pennsylvania. He grew up outside Philadelphia. Bruce was a proud alumnus of The Meadowbrook School in Meadowbrook, Pennsylvania, the William Penn Charter School, and the University of Michigan. He originally studied journalism as an undergraduate and later completed graduate coursework in Russian Studies and journalism.

Bruce told people his line of work was "books and kids." He worked at a bookstore in Ann Arbor, Michigan after graduation. He met his wife, Joanna Pierson, in Ann Arbor, and together they moved to Baltimore, then Newton, Massachusetts, before finally settling in Frederick in 1979. He had lived in Braddock Heights since 1983. Bruce worked as a bookstore manager, including as a district manager for Crown Books, until leaving work to stay home to raise his two children in 1987. He returned to work at Waldenbooks at the Francis Scott Key Mall for several years when his children were older. He also volunteered at Middletown Elementary School, and as an adult literacy tutor with the Literacy Council of Frederick County. Although he was not Jewish, he was a member of Beth Sholom Congregation in Frederick, which his wife and children attended, and led the English readings at his children's bar and bat mitzvahs.

Bruce and Joanna were together for forty-eight years and were married for the past thirty-eight years. Together, they traveled around the United States and Canada in their twenties and thirties, and more recently traveled throughout Europe, and to Russia, Israel, Egypt, India, and Costa Rica. Bruce was a wonderful cook, and especially enjoyed cooking family meals for holidays and learning new recipes from places he had traveled.

Bruce enjoyed rooting for the Michigan Wolverines football team and was a devoted baseball fan. He grew up attending baseball games in Philadelphia with his father and grandfather, and was a longtime fan of the Philadelphia Phillies and Baltimore Orioles. Bruce was also an avid trivia buff. He was on the winning team in The Arc of Frederick County's annual trivia fundraiser for several years, and watched Jeopardy religiously. He was always up to date on current events, and read the Washington Post, Frederick News-Post, and New York Times every day. He listened to a range of music, from classical to rock to classic Broadway musicals. He was a season ticket holder to the Baltimore Opera Company for several years, and enjoyed attending Baltimore Symphony Orchestra concerts and a range of theater and music performances. Bruce loved animals, especially dogs, and lived with a series of trusted canine companions throughout his life. He also loved birds and could identify many bird species by their song.

Bruce is predeceased by his parents and his brother, Steven Kenworthy. He is survived and dearly missed by his wife, Joanna Pierson of Braddock Heights; his children, Leon Tyler Kenworthy of Washington, D.C., and daughter Dorothy (Jody) Kenworthy and husband Sean Garwood of Crofton, Maryland; stepmother Nevenka Kenworthy; siblings Robin Bosco, Karen Kenworthy McCabe, Philip Hinchey, Keith (Teresa) Kenworthy, and Scott (Oana) Kenworthy; and many brothers and sisters in law and nieces and nephews.

A funeral will be held at 2 p.m. on October 23, 2021, at Country Pleasures Farm (Willow Oaks Cider), 6219 Harley Road, Middletown. In lieu of flowers, donations may be made to the Literacy Council of Frederick County, the Leukemia & Lymphoma Society, or the Lymphoma Research Foundation.

Expressions of sympathy and remembrances may be offered to the family at staufferfuneralhome.com or by contacting Leon Kenworthy at [email protected]
Published by The Frederick News-Post from Oct. 13 to Oct. 15, 2021.
To plant trees in memory, please visit the Sympathy Store.
MEMORIAL EVENTS
Oct
23
Funeral
2:00p.m.
Country Pleasures Farm (Willow Oaks Cider)
6219 Harley Road, Middletown, MD
Funeral services provided by:
Stauffer Funeral Home
MAKE A DONATION
MEMORIES & CONDOLENCES
Sponsored by Stauffer Funeral Home.
6 Entries
"All that we love becomes part of us." The joyful, thoughtful touch of Bruce's life will always resonate within our souls.
Rosie Marr
Friend
October 22, 2021
Jody - Have you and your family In our thoughts and prayers! Craig
Craig Trimm
October 21, 2021
Our condolences on your loss, Joanna. Played against him once in the Trivia contest; he made me smile! We will hold you and your family in our hearts.
Rick Brace
Other
October 20, 2021
Jody & Family, Praying for you all and asking God to give you comfort and strength. My deepest sympathy and condolences are with you.
Kim Graham
October 19, 2021
RIP Bruce.
Frank Titus
Friend
October 15, 2021
Dear Joanna, Leon, Jody & Sean- We are sending you our deepest sympathy on the passing of your beloved Husband, Father and FIL. May your memories bring you comfort in the days ahead. Someone so loved will never be forgotten- The Bucheimer's David, Lisa, Mark, Jaclyn [Eric], Philip [Emily]
Lisa Bucheimer
October 14, 2021
Showing 1 - 6 of 6 results