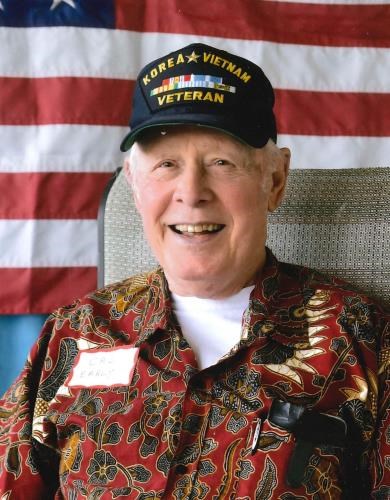 Cal was born in Lima, Ohio to Calvin D. and Olive (Billie) Early on October 25, 1930. He went to high school in Lafayette, Ohio. He graduated first in his class from The United States Coast Guard Academy in 1952 and went on to earn his MD and PHD at the Ohio State University.

Cal served in the Coast Guard from 1952 to 1955 on Engineering Billets, the Ice Breaker Mackinaw, and a Secretary Class Cutter. He entered the United State Navy Medical Corps in 1960. From 1967 to 1968 he served as a neurosurgeon in DaNang, Vietnam performing over 600 surgical procedures. He was assigned to the National Naval Medical Center in 1968 in Bethesda, MD. In 1975 he established the neurosurgery Residency Training Program there and acted as its director through 1983 when he retired as a Captain. After retiring from the Navy, he started a private practice, Cumberland Valley Neurosurgical Consultants in Chambersburg, PA where he worked until he retired from medicine 1994. In his retirement he flew for the Coast Guard Auxiliary for over ten years and served as a Flotilla Commander from 2004 to 2005.

Cal's passion for flying started at a very young age, piloting both single engine planes and helicopters. He broke the speed record from San Francisco to New York on April 17, 1992 in his beloved Beechcraft Bonanza, sporting its call letters N1CE. This record, at 261 mph, remains unbroken. He was the president of the American Bonanza Society in 1977 and was an avid member of the Aircraft Owners and Pilots Association (AOPA).

Cal lectured and published articles regarding neurosurgery, and was a member of several neurosurgical associations, including the Neurosurgical Society of America.

He is preceded in death by his parents, his sister Janice, and son Karl.

Cal is survived by his wife Dottie, his children, Kevin (Cindy), Nichola (Don), his grandchildren, Christiana, Tim (Chantel), Anna, Michael, and Maria, many nieces and nephews, and his dear dog, Sandy.

A celebration of life will occur at this home, the place he loved best, at a date to be announced.

Funeral services will be held at a later date at Arlington National Cemetery.

Published by The Frederick News-Post from Mar. 13 to Mar. 18, 2020.
To plant trees in memory, please visit the Sympathy Store.
MEMORIAL EVENTS
To offer your sympathy during this difficult time, you can now have memorial trees planted in a National Forest in memory of your loved one.
MAKE A DONATION
MEMORIES & CONDOLENCES
4 Entries
Mrs. Early, my name is Gabrielle Moquin Rhoads. I was a 7 Year old patient of Dr. Early, and because of him I am 56 years old with a loving husband, 2 grown sons, and a granddaughter. The impact he has made is beyond the imagination with my parents and siblings. Dr. Early was a mentor of my brother Ross who has carried on the skills, knowledge and compassion. Our thoughts and prayers go out to you and your family.
Gabrielle Rhoads
May 5, 2020
Dot
Cal is one of my favorite people. I am grateful to have known you both. I grieve with you at his loss and rejoice in your time together. Love and hugs Susan Fulton
March 27, 2020
Our dear friends, Nicky and Don, we are thinking of and praying for you and your family at this time of sorrow.

Gary and Jan Burdette
March 17, 2020
Calvin "Buddy" will be missed by the Frederick County Veterans History Project and his friends there. He always wore a smile! What a remarkable life he led and fortunately it is recorded by the FCVHP.
Priscilla Rall
March 17, 2020
Showing 1 - 4 of 4 results