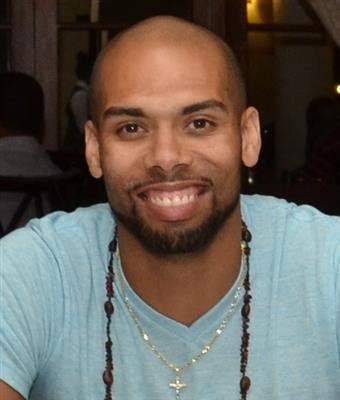 BORN
1990
DIED
2015
FUNERAL HOME
Molesworth-Williams P.A. Funeral Home
26401 Ridge Road
Damascus, MD
Corey Anthony Hunt, 25 years of age, from Frederick, MD passed away on the morning of Monday, September 7, 2015 at home, surrounded by his family, after his 5 year battle with synovial sarcoma.He was born on April 9, 1990 at Bethesda Naval National Medical Center.He graduated from Governor Thomas Johnson High School in Frederick, MD where he played football & continued his education at Shippensburg University in Shippensburg, PA on a football scholarship. He received his BS degree in Geo-environmental Studies in 2014.Corey was an all around athlete who's passion, leadership & zest for life exuded in everything that he did on & off the field.

He made the most of each day & brightened the world & the lives of so many with his smile, humor & warmth. He never complained about his circumstances & displayed amazing strength in every battle that he faced. Corey constantly went out of his way to add joy, hope & inspiration to the world around him & the love that he had for his family & friends was a force not to be reckoned with.Corey is survived by his parents Steven & Michelle Hunt, his younger sister Ciara Waddy, his younger brother Dakota Hunt, his grandmother Chong Laspino, his Big Pops Juan Melendez, his eternal soulmate Alexandra Parks, numerous aunts & uncles, cousins & extended family. Corey is also survived by the numerous friends that he made all over the world. He was predeceased by his grandfather Angelo Anthony Laspino in July of 1998, his faithful friend Tar in October of 2007, his grandma Jessie Melendez in September of 2010, his grandma Mary E. Waddy in May of 2013 & his granddad Steven R. Hunt Sr. in April of 2014. Corey Hunt's Celebration of Life will be held on Friday, September 11th at 1pm.St. Michael's Catholic Church, 1125 St. Michael's Road, Airy, MD. 21771-3299 410-489-7667 (Parish office) Service to be followed by reception at same location. Donations can be made to: Corey's Story Fund at https://www.youcaring.com/corey-hunt-394476 These funds will be used to take care of Corey's remaining medical expenses & final arrangements. You may also send flowers to the church. Online condolences may be shared with the family at www.molesworthwilliams.com

Thank you to everyone for your continued prayers, love, support & encouragement!

Pauline, Dennis, Nick & Maria
Pauline & Dennis Jiffas
September 11, 2015
I'm lifting up each family member as you walk through this journey. May the love and memories that all of you shared be eternal.

Ms. Sampson
TJ High School
Patricia Sampson
September 11, 2015
I did nt know you but I can tell you touched many lives. RIP Corey.
Amy
September 11, 2015
We scored a lot of touchdowns and made a lot of tackles together when we had our championship run back in High School. You were scoring most of the touchdowns that year. Also got to tear up track with you in the 4x100 your senior year.

We went to a lot of the same parties and raved at Electric Zoo together.

Had the privilege to buy you a beer or two at Brewers about six months back. Just like everyone I wish I could have done more for you and I remember you telling me, "No, you live your life." With such a humble and adamant demeanor.

A few months ago I saw you and Alex at Sheetz while I was working. We had a quick talk and it never occurred to me that it would be the last moment I shared with you. Hindsight is 20/20 and I really wish I would have given you a man-hug.

You deserved a better hand than you received. I think God is calling up a lot of captains these days. You and Dustin will be making miracles play by play in Heaven. A true fighter, leader, family man and great friend.

Love you and will forever miss you man,

-Brock
Brock Chapman
September 11, 2015
No brighter light than Corey just being the person God created him to be in this world. I can only imagine what he is enjoying in his heavenly body. Hard for the rest of though, but we will get through in his honor. Rest easy now dear Corey.
Ford Family
September 11, 2015
Michelle and family,
Our deepest sympathies to you all. It's so hard to find the words to express our feelings.....We are praying for emotional peace and healing hearts for you.

Tomalewski and Popovich family
Darlene Tomalewski
September 11, 2015
We have been praying for Corey and family through this week and the entire time since we knew he had cancer. I remember Corey coming through my lunch line at TJ. He was always very respectful and polite and he was a wonderful young man to talk to. We will continue to pray for your family.
Peggy Hahn
September 10, 2015
The Rascoe Family want to extend our deepest condolences to the Hunt family for the loss of Corey. Corey was a young man of character, intelligence and integrity. He was loved by many, and he will be missed by all. Understand that God makes no mistakes. May God continue to strengthen and bless your family during this difficult time. R.I.P. Corey.
The Rascoe Family
Melvin Rascoe
September 10, 2015
How one person can touch so many lives in a short period of time is truely amazing. I thought I was one of the lucky few that got to know Corey but I was so wrong. I was one of thousands to call him friend, son, and brother. You will be missed every day. XO
Laura Schlote
September 10, 2015
Rest in peace.
Suzie
September 10, 2015
I remember Corey as a young man sure of purpose, distinguished of character.
September 10, 2015
Jessica Thomas
September 10, 2015
Out continued thoughts and prayers are with you and the family.
Sharon Dalessandro
September 10, 2015
Rest in Peace Brother
Teresa Lewis
September 10, 2015
I did not know Corey, but through Sonja Seeley, who I work with I did. I want to let the family know that I will continue praying for their strength through this difficult time. Corey was an amazing young man who touched lives in a positive and life-long way. His legacy and presence will be with you forever.
Michelle Simmons
September 10, 2015
My thoughts and prayers are with your family in your time of need! Corey was an amazing person! Life itself won't be the same without that amazing smile!
Queena Ussery
September 10, 2015
We had the pleasure of meeting Corey and getting to know such courageous person. Always a Red Raider. Many thoughts and prayers to Alex and to Corey's family. Clyde, Trisha, and Cameron Tinner
Trisha Tinner
September 10, 2015
You have forever changed my life Corey. RIP my Super Hero... until we meet again. ♡♡♡
Sherri DePollar
September 10, 2015
<3 Thoughts & Prayers
Ren Lewis-Askounes
September 10, 2015
So very sorry for your loss. Corey was a wonderful person and feel blessed to know him. thought and prayers to everyone.
Tony Koontz
Tony koontz
September 10, 2015
Corey I didn't personally know you, and sorry we never had a chance to meet, but I knew you through my great friend Tami Howard. Your beautiful smile stood out. You will be greatly missed but never forgotten. God bless you.
Tammy Harmon-Erwin
September 10, 2015
OUR THOUGHTS AND PRAYERS ARE WITH THE HUNT FAMILY, GOD RECEIVED ANOTHER ANGEL.