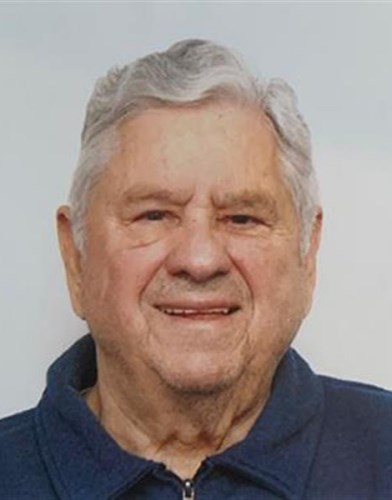 BORN
1935
DIED
2020
Jack Edward McIntyre, 84, of Taneytown, Maryland passed away from pneumonia on April 6, 2020. He was born on September 24th, 1935 in Enterprise, West Virginia. His parents ­­­­­­Ruth and Harold McIntyre, and brother Jim McIntyre predeceased him. He was the loving husband to Carolyn Yvonne Cutlip McIntyre for 64 years.

Jack and his family moved to Idamay, West Virginia when he was in junior high where he would meet the prettiest girl in town, Carolyn. On their first date Jack asked Carolyn if she wanted a coke. She said, "that would be alright." He came back with her coke and she asked him where his was. He told her that he already drank it. Years later he told her that he didn't actually drink his coke, he just didn't have enough money to buy himself one. That was their love; unselfish, kind, and the purest love of all.

Jack graduated from Farmington High School in Farmington, West Virginia in 1953 where he lettered in three sports: basketball, baseball and football. He went on to graduate from Fairmont State College where he earned his Bachelor's of Education degree. Carolyn and Jack got married while he was a student on December 17, 1955. They had a 2-day honeymoon so he could get back to play basketball. They celebrated their love by candle light with a ham sandwich with frozen orange pop. This was the beginning of their great love story. Jack left Fairmont State as the school's career scoring leader with 1,798 points and averaged 23 points per game. (He would want you to know, this was before three pointers!). Jack's highlight game was the WVIAC All-Tournament where he scored 39 points against Morris Harvey. Jack also lettered in baseball at Fairmont State College and was an all-conference pitcher. Jack was inducted into the Fairmont State Hall of Fame for basketball in 2008.

After college, Jack and Carolyn went on to Berea, Ohio where began his coaching career as the head coach of basketball for Olmstead Falls High School for five years. They went back to Fairmont, West Virginia where he coached basketball and football at Rivesville High School for seven years. During that time, he earned his Master's Degree in School Counseling before returning back to Ohio for his first counselor position at Marietta High School. Jack and Carolyn then made the move to Maryland together with their two children for the high school counselor position at Churchill High School where he worked for 25 years. Jack loved his students as if they were his own. He helped so many succeed in academics and achieve personal victories.

In addition to sports, Jack always loved the great outdoors: hunting, fishing, and gardening. During his last days, he was still traveling to the local fishing ponds to see if he could catch any fish. Jack and Carolyn also always had dogs in their family who brought so much joy and laughter to their lives.

With all of his achievements, his greatest was his first and only love, Carolyn McIntyre. As long as they had each other, they had everything.

The family would like to thank the nursing staff and doctors at Carroll Hospital in Westminster, MD who despite the terrible COVID virus, took care of Jack when his loved ones could not be with him. Jack was a very spiritual man. He believed in God and we take comfort knowing that God and the angels were with him. His favorite song was "Take Me Home Country Roads," and we know that's exactly where he is... Home.

There will be a Celebration of Life in the near future, and in lieu of flowers, Jack would have wanted any gifts to go to Fairmont State University Athletics (www.fsufoundation.org), or to tree donations for West Virginia's Monongahela National Forest (www.alivingtribute.org).
Published by The Frederick News-Post from Apr. 9 to Apr. 10, 2020.
To plant trees in memory, please visit the Sympathy Store.
MEMORIAL EVENTS
To offer your sympathy during this difficult time, you can now have memorial trees planted in a National Forest in memory of your loved one.
MAKE A DONATION
MEMORIES & CONDOLENCES
6 Entries
I was so sad to learn of Jack’s passing. Jack and Carolyn were my next door neighbors in Gaithersburg. I had recently moved to MD from the state of Washington due to my husbands’s new job. I had a baby daughter Heidi and was far from my own family and home and more than a little homesick. Carolyn and Jack were a source of kindness and support - sometimes babysitting for Heidi. I have pictures of Cindy and Jay playing with Heidi and their dog in the backyard. Jack’s background was so similar to that of my Dad - son of coal miner who got to college because he was an outstanding athlete. My dad was also a high school counselor.Their family and the Rossi’s ( another neighbor) became “my family” away from home and helped me so much during a tough time. The loving relationship between Jack and Carolyn was apparent to all who knew them. Jack was always there with quick humor, kindness and a helping hand. My condolences to Carolyn, Jay, Cindy and all their family. Dee (Montgomery) Adams
Dee Adams
Neighbor
January 26, 2021
Wow! Just found out that Jack passed away in the MCPS newsletter. I worked with Jack for 22 years. He was awesome! He had a great laugh and a wonderful sense of humor. When I retired from Churchill, I really missed him. I taught Spanish and I was one of those"hard" teachers. . Jack was always trying to convince me to cut a break to a certain kid. And you know what? I always did after talking to Jack. He adored Carol and he frequently talked about her. He was a great guy and we had many happy hours together with Dave Roos. So sorry to hear that he passed away. I am crying now as I look at his picture. God bless you Jack!
Diane Miller
Coworker
September 21, 2020
Condolences to your family, all who knew and loved your wonderful Dad.
Linda Nischan
April 11, 2020
Met him at our hunting camp and felt we hit it off from day one! We traded hunting stories as well as life stories. He for sure was special person and will be missed. Talks my friend and be with god, happy hunting! Billy Carter
Billy Carter
Friend
April 10, 2020
So sorry to learn of this as we will always remember when Jack & Carolyn live on Lake Avenue and having good time with the neighbors. We offer our prayers and condolences to Carolyn and Family. May God bless you all.

Rab And Patty Snider
1217 River Road
Fairmont, WV 26554
Charles Snider
April 10, 2020
On behalf of the Officers & Brothers of TBI Alumni Association and Tau Beta Iota Fraternity, I should like to extend our condolences at the passing of Brother McIntyre.

Brother Jack and all TBI's who have left us during the past year will be remembered at the Memorial Service held during our annual Founders Day Dinner in March.