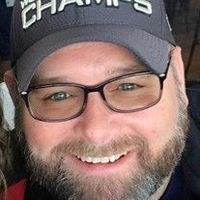 Bryan Lane Nason, 47, of Manassas, Virginia (formerly of Kingston, New Hampshire) passed away after a sudden illness on Saturday, May 29, 2021.

Bryan honorably served his country as a Corporal in the United States Marine Corps from 1992 to 1996.

Bryan is survived by his father, Paul L. Nason, of Danville, NH, his mother, Karen Dubay, and sister, Tammie L. Nason, both of Dover, New Hampshire. He also leaves behind several beloved uncles, aunts, cousins, and second cousins who will miss him dearly. He will be remembered by the lifelong friends he made along the way, in NH, in the Marines and those in Virginia - he counted them as family. He was affectionately known by his friends as 'Nas'.

To keep Bryan's memory alive, cheer as loud as you can during a New England sports game, honor those who serve our country in the best way you can, or make a donation in his memory to a charity he was passionate about, the Northern Virginia Veterans Parade where he served as Vice President of the Board of Directors: www.vetpar.org or mail it to 8665 Sudley Road, Suite 247, Manassas VA 20108-4588.
Published by The Free Lance - Star on Jul. 20, 2021.
To plant trees in memory, please visit the Sympathy Store.
MEMORIAL EVENTS
To offer your sympathy during this difficult time, you can now have memorial trees planted in a National Forest in memory of your loved one.
MAKE A DONATION
MEMORIES & CONDOLENCES
0 Entries
Be the first to post a memory or condolences.